Clive Anderson on how he made it his mission to ease the transition from life to death his career. 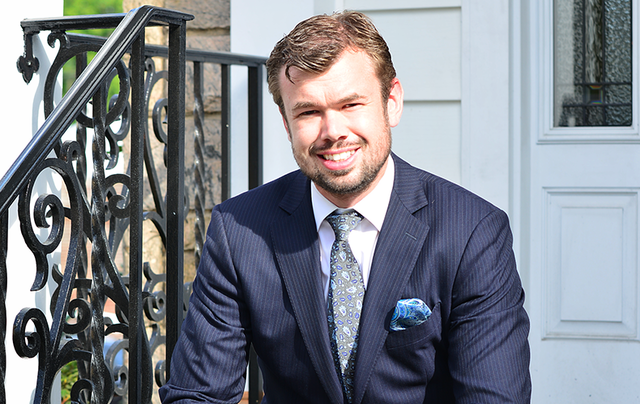 Death and funerals are uncomfortable realities, but Irishman Clive Anderson, owner of a New York funeral home, has made it his mission to ease the transition from life to death. He speaks to Debbie McGoldrick about his career choice.

Funeral parlor owner doesn’t usually rank up there on the “things I want to be when I grow up” list, but Clive Anderson, a native of Ballinhassig, Co. Cork who owns the Pelham Funeral Home just north of Yonkers, couldn’t see himself in any other career.

Though he’s only 34, Anderson has owned his business for more than three years.  Dealing with death on a daily basis would wear down many, but not this soft-spoken, passionate about his profession Irishman who decided to enter the funeral business after his father died.  Anderson was only 15 at the time, and vividly recalls when his cancer-stricken dad was removed from the family home in the early hours of the morning, shortly after he passed.

“I remember the funeral director coming to the house at like one in the morning, and that three men got out of their beds to come and remove my father,” Anderson told the Irish Voice during an interview.

“They took him into their care and I remember how they did it, with such reverence and dignity.  They looked at Dad as a man who had lived instead of someone who had just died.  It really made an impression on me. It left a mark on how us Irish celebrate the life of the deceased.”

Anderson’s interest wasn’t a passing one.  Not long after his father’s burial he started apprenticing with Jeremiah O’Connor, the undertaker who buried his father in one of his Cork funeral homes.  He spent his weekdays at school and weekends at the funeral home laying people to rest.

“We would go to career guidance counselors at school and they would ask what you wanted to do with your life, and when I said I wanted to be a funeral director they would say, ‘No, really, quit the jokes,’” Anderson laughs.

“When I said I was serious they would say, ‘Okay, if that doesn’t work out what would you like to do?’ But I was determined to make it work.”

Anderson’s father owned a business selling life insurance.  Sales didn’t ignite any great desire in young Clive, who tried it for a while and soon decided to go full throttle in pursuit of his true calling.  And that led him to one place: America.

The funeral business in Ireland isn’t highly regulated and doesn’t have any educational requirements.  Funeral costs are low compared to what they are in the U.S. but standards suffer dramatically, Anderson says.

“Basically anybody can take a scalpel and call themselves an embalmer in Ireland which is quite upsetting,” he adds.

The higher quality funeral businesses in Ireland usually have American training at their core.  Jeremiah O’Connor learned the art of embalming here, as did David McGowan, a second-generation funeral owner in Co. Mayo.

“I said I would do the same thing, go to America for two years, get my degree and come back to Ireland.  But it didn’t take long until I fell in love with it here and just stayed,” Anderson recalled.

That was 14 years ago.  Anderson went to mortuary school at Mount Ida College in Newton, Massachusetts, just outside of Boston, and completed the two-year associate degree and apprenticeship at the same time.  The course work was all consuming, including studies in mortuary science, biochemistry, restorative art, cosmetology and business, all of which are necessary components of running a successful funeral home.

“It was very tough and challenging but I enjoyed it,” says Anderson, the sole immigrant in his class and one of the few who didn’t have a family background in the funeral business.

Clive Anderson, owner of a New York funeral home, has made it his mission to ease the transition from life to death.

After completing the degree Anderson remained in Boston working for a company that imported caskets from Ireland.  Heritage Caskets was successful enough, but Anderson remembers it was tough going explaining to funeral directors why an Irish-made casket would enhance their business.

“I remember going to see one of the directors, an Italian guy, and he said to me, ‘You know what you are doing? It’s like what the Italians do, trying to sell tomatoes to Americans when we already have tomatoes in America.’”

Heritage Caskets was eventually bought by a large U.S. conglomerate, and Anderson stayed on as a salesperson.  His job took him to various parts of the Northeast, but he never swayed in his plan to eventually own a funeral business of his own.

Enter Pelham Funeral Home on Lincoln Avenue in the Westchester town of Pelham, only a few miles from the Irish American strongholds of Yonkers and Woodlawn in the Bronx.  Anderson was familiar with the second-generation owners – eventually he left Boston and settled in New York – and enjoyed a friendly relationship with them through selling caskets.

Wanting a funeral business close to New York City was Anderson’s goal, and Pelham fit to a tee.  He asked the owners about a sale in 2012 but they weren’t interested. Two years later they were.  Anderson closed on the deal in February of 2014.

Life as an undertaker is hardly routine.  Pelham Funeral Home has buried as many as 20 people in a month, and as few as two.  At the end of the year, he says, the numbers balance out.

Death, obviously, is random.  But the emotions connected to it are not and can be hugely difficult to deal with, especially when funerals are being held for children and victims of sudden and unforeseen happenings.

“We wish we never had to have funerals for children or those who die in tragic accidents,” Anderson says.  “But obviously you have to be there when that happens. And for sure, dealing with people when they are grieving does take a toll.

Anderson employs three full time staff and a number of part timers.  He no longer does the embalming himself but oversees every aspect of the business.  Guiding grieving families through the most difficult times of their lives is his foremost priority.

“They are in shock, and I am with them the whole way through. And they are all unique to me,” he responds when asked if any particular funerals stand out.

“Sometimes being the funeral director in a town like Pelham with 13,000 people, it’s like being the mayor for lack of a better term.  Everybody knows you and you get to see everyone.  I never forget the people who I have had to deal with in their time of grief.”

Do funeral businesses compete with each other, given the nature of the services they provide?  Anderson says they do, not with flashy ads that would surely be distasteful but by the quality of the services on offer.

“We are extremely focused on attention to detail, and treating a grieving family as if it was our own family,” he adds.  “A family came in to me this morning and said that I must put 100 percent of myself into this business. I said that I do.”

Anderson has worked extensively with the Kevin Bell Repatriation Trust, a charity based in Newry, Co. Down that was formed in honor of the late Kevin Bell, a 26-year-old GAA player who died in New York in June of 2013 after a hit-and-run accident.  The well-regarded trust run by Kevin’s father Colin has raised thousands to “alleviate the financial hardship of bereaved families repatriating the body (bodies) of loved one(s) who have died abroad in sudden or tragic circumstances back to Ireland,” says the charity’s mission statement.

Anderson says the Bell family has been instrumental in helping shocked families deal with pressing realities.  “They are great. We have worked with them many times unfortunately,” Anderson says.

“For someone in Ireland to lose a loved one abroad is really tragic. And in America there is a lot to deal with. When Colin Bell makes a phone call, I tell the families involved not to worry about anything because we will take care of everything.”

Anderson is unmarried and splits his time between his apartment on top of the funeral home which he uses when working, and one that he has in Woodlawn. He’s the only Irish native to own a funeral home in the Northeast, and a number of Irish and Irish Americans have been buried or cremated at Pelham Funeral Home.  Anderson is hoping to expand his business, perhaps even to Ireland, though America will remain his primary base.

“I miss the connection and would like to go back to Ireland more often,” he says.

“We’re all getting older and sometimes it’s hard to just stop and appreciate what it is that we have.  That’s a lesson I’ve learned in this business.”