An Irish ballad of leaving and endings

Since June began I have been somewhat malevolently enjoying myself hugely on all possible occasions by singing in singsongs in Clare’s bars my dreadfully tear-jerking ballad called “The Leaving.” 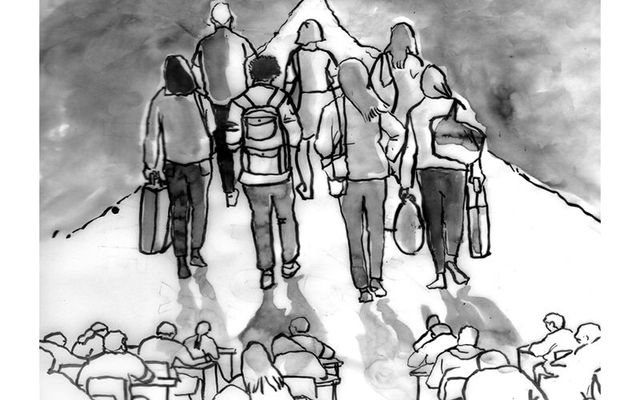 It’s summer here at last in challenging times on about every front, so let's respond in the best Celtic way possible by turning our backs against all the social and political and economic problems swarming around all our heads by indulging in a bit of craic. That is a good cure at the end of the day.

Accordingly, can I state this June has blazed upon us magnificently on this side of the Atlantic Ocean not just with a heatwave by our standards but also with a concurrent sporting explosion, mainly on the GAA championship front, which has totally distracted us from concerns about the real world.

Nobody was speaking about the abortion referendum result in the early days of June except the media pundits. The plain people were enthusing about Tipperary’s hurlers coming back from the dead on Sunday, a man down and 10 points behind in the second half, to force a draw against Waterford. And Galway’s win over Kilkenny in hurling and over Sligo in football.

And, for myself, as a Fermanagh man, my county’s dramatic win over dominant neighbors Monaghan in the Ulster football championship, a victory which takes us into the Ulster final in Clones in three weeks time. We are one of only two counties to have never won a provincial title.

Maybe this is the year, so who cares about Brexit or the activities of Trump and your strange lad in North Korea these days.

There will be a lot of craic in Clones for sure before the month is over. I’ll be there in a green jersey hoping for a miracle on the sporting front that matters so much to so many of us on both sides of the pond.

Meanwhile, since June began I have been somewhat malevolently enjoying myself hugely on all possible occasions by singing in singsongs in Clare’s bars my dreadfully tear-jerking ballad called “The Leaving.”

Against the background where the second level teenage school students of the nation are attacking the mandatory state examination which is so vital for their future lives, my rendition in late pubs invariably creates rivers of tears down the faces of mothers who know they will soon be losing their darlings to the hungry wide world out there waiting for them. I think I mentioned this homespun ballad to ye before but, just for the craic of it, here again is just the first verse:

From a city bus at noon one summer afternoon,

Through a classroom windowpane,

I saw them all,

On an honors paper chase in that exam hall,

They looked so fair and young that it seemed very wrong,

To have them captured there out of the sun,

For those that teach the youth,

Don’t teach them all the truth,

For they were doing their leaving and still were grieving,

Not quite believing their childhood is gone,

Though they may fail or pass time comes for every class,

See what I mean? There are two other verses to hammer the point home, and I do have to bring a box of tissues with me when I sing it in the month of June when the examination pressures are on the rising generation because the tears flow very freely indeed.

I know I should be ashamed of myself for singing such pain, but dammit I’m not because I’m only telling the truth in melodic form. And nobody ever listened to my (bad quality) singing before like they listen to this one.

I think my great friend Mai Hernon, now based in the U.S., has recorded a version of this tearjerker so, if you feel nostalgic, lay hands on Mai’s CD and get your handkerchief ready when you play it.

I suspect this yarn is a bit briefer than usual, but I feel this minute like walking up the Millstream Estate hill to Willie Walsh’s lively pub in the heart of sun drenched Killaloe and having a few pints and a bit of craic whilst getting ready to sing my seasonal tear-jerking ballad again at the drop of a hat.

Is that okays? Can I go now under the moon above the Shannon?