"Irrespective of the wind direction, always seems to choose to fly against the prevailing air currents. There are frequent changes of direction, sometimes every hour." 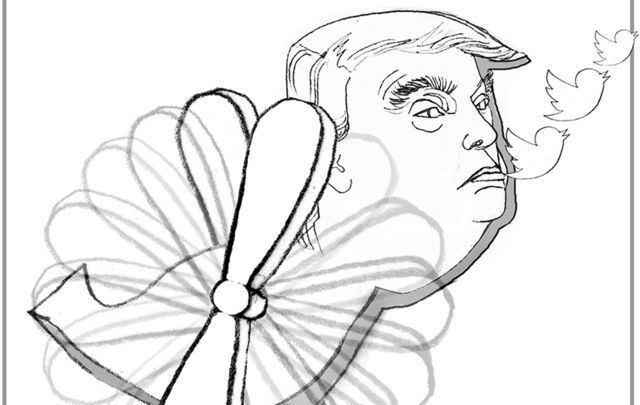 I have noted for years now that ye are very fond of lists, especially lists of just 10 segments. With that in mind I hereby offer a list of that length, entirely without any comment.

It is founded upon raw and accurate reportage rather than my usual class of balderdash, and I hope some of you will relish that reportage.

1: I met some very interesting characters a couple of years ago at the great Irish festival in East Durham up in the Catskills.  None were more interesting than the flamboyant Denis Winters from your parish, a gentleman of many arts and abilities who captured any company he joined up in East Durham inside five minutes.  A lovely man who is now a friend.

2: Among Denis's skills is the capacity to fashion splendid wooden whirligigs. Around the period when your last presidential election was heating up Denis posted me two of his creations across the Atlantic to Clare.

I was delighted to get them. I mounted them atop my back garden fence above the roses and their hidden thorns. They were carved as birds in flight.

3: The smaller petite enough whirligig I christened Hillary at once.  She was flying high and free when placed atop the fence and took advantage of every breeze that blew.

The much larger and very macho-looking bird I named Trump.  He was twice as large as Hillary and, back then, not nearly so active on his perch above the roses.

Regular readers may recall that I mentioned my experiment many months ago with the report that the Trump whirligig was blown totally off the fence by a small gale. It happened, ironically, during the same week as the then candidate was heavily criticized for making lewd comments about how stars could treat women.

I replaced him on his perch when the gales abated and watched the flight paths of both in the months that followed. Hillary was always busier and flying higher until right to the very end of your electoral battle. I continued to observe.

4: These observations, for whatever reason, have become intriguing altogether since your new president was installed in the White House about four months ago now.

5: The Clinton whirligig now rarely takes flight at all, even when the winds are quite strong as they often are when they come sweeping in from Lough Derg. She looks somehow smaller and subdued.

It is also a fact that a red rose bush has grown up around her perch, and sometimes it is hard enough to see her at all. Upon very close examination I have noted that the sharp thorns of the bush are now embedded in her wooden wings and this inhibits their free movement.

6: The whirligig I named after President Trump, on the other hand, has become highly animated altogether since the inauguration.  I do not know the significance of this but have daily documented elements of his behavior and now fully report them to you all for whatever potential significance ye may wish to draw from them.

7: The Trump whirligig, who used to deploy both wooden wings every day during the electoral battle, now, dramatically, only uses his right wing at all times. The left wing, seemingly, has been declared redundant. I have checked it out thoroughly and it is in prime working order but, for whatever reason, is not being used at all.

8: The Trump whirligig, irrespective of the wind direction, always seems to choose to fly against the prevailing air currents. There are frequent changes of direction, sometimes every hour.

Again, irrespective of the prevailing weather, this Trump whirligig is infinitely more active during the night and the early morning than during daylight hours. Perhaps because it is being overworked, that right wing, despite the craftsmanship of Denis Winter, is feeling the strain even though I oiled it several times.

It makes a kinda twittering sound, quite loud, especially just before dawn, which has woken up both myself and the Dutch Nation from our slumbers more than once.

9: Neighbors, family, friends and visitors to the house have complained several times about the twittering noises from that right wing and have advised me to remove both whirligigs from my fence. Out of respect for my friend and a fascination with what will occur in the future, I have so far resisted these advices.

10: It is past midnight on a calm May night as I finish this piece and, despite that calm, under a full moon, I can still clearly hear the twitteration of that right wing through two doors. I wish it would cease.

I would appreciate any advice from wiser folk than me about how to address this problem without offending Denis Winter.  Help me out please.