Enda O’Doherty made international news when he hiked up Mount Kilimanjaro with his 61 pound washing machine now he’s decided on his next challenge. 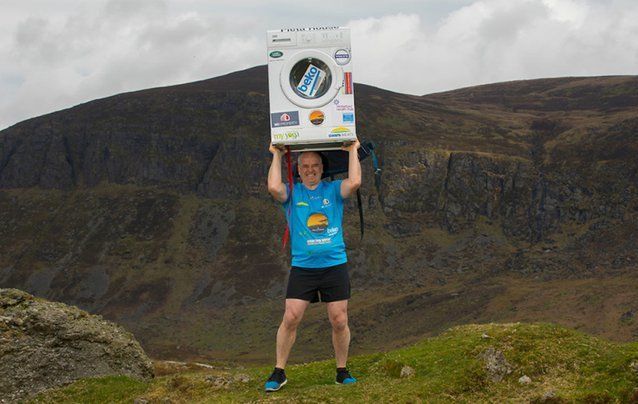 Mental health activist Enda O’Doherty is planning nine marathons along the Great Wall of China all whilst carrying a washing machine.

In July O’Doherty made international news when he hiked up Mount Kilimanjaro with his 61 pound washing machine to raise funds for the suicide prevention charity Pieta House and now he’s decided on his next challenge.

“It’s not definitive but I’m going to try and attempt nine consecutive marathons on the Great Wall of China with a washing machine,” he told IrishCentral.

“So up and down steps for 26 miles every day for a couple of days, that’s the plan.

“But I definitely won’t be returning to altitude because it really didn’t suit me, I was so ill.”

O’Doherty didn’t quite make the summit of Kilamjaro, stopping three hours from the summit, but his friends made sure that the washing machine did make it to the peak.

@beat102103 #kilimanjaro team are home safe and enroute to #Waterford with the washing machine. Raised close to €170,000 for @PietaHouse pic.twitter.com/EMrKHfhML9

The altitude sickness however means that the holy grail of mountaineering, Mount Everest, isn’t on the cards for him.

“I’d love say I’d go to Everest Base Camp or Machu Picchu looks fantastic but you’ve just got accept that you’ve got limits. It [altitude sickness] was just so debilitating that I wouldn’t be rushing back to it.”

In the meantime he’s embarking on a short speaking tour of the United States and the speaker fees with donated to Pieta House in New York. The organization originated in Ireland but set up a base in New York to help combat the mental health problems of the Irish community there.

“If you’re a young Irish person and you’re away from home in the States and you’re going through hell, it’s nice to think that someone might help you.”

And he’s considering turning his experiences into a book to raise even more cash for the cause.

“We’ve started the process of writing a book about the two adventures, the first I ran nine marathons in eight days with the washing machine, and then there was the Mount Kilimanjaro adventure and hopefully the Great Wall of China.”

Such physical exertion however requires a lot of fitness training.

“Long hours of walking,” was his blunt summary of his training regime.

“But I’m sort of half baby gorilla at this stage, my shoulders, chest and arms are very strong. People assume the weight is on your back but actually with the harness it falls particularly on your shoulders and chest. So lots and lots of pull ups and bench presses. Lots and lots of hours in the gym.”

But he’s completed Ironman races before and he says the challenge is pretty similar.

“The ironness is not race day, the ironness is committing to twelve to fourteen hours for a year - that’s the ironess! So I suppose it’s the same with washing machines.”

Unlike the hike itself however, he feels his activism isn’t an uphill battle; Irish attitudes towards mental health have changed hugely and for the better in recent years.

“I’m teaching in one of the largest boys’ schools in the country and I can tell you I had three young men knock on my door this year and say ‘I’m in trouble, I need help.’

“And my first words were to them were, ‘Of course we can get help for you.’ And to congratulate them on their strength and their bravery. The strong silent type is the strong dead type.

“The Ireland I grew up in in the 70’s I wouldn’t dare have expressed weakness or that I need help.

“But my sons would express that without any hesitation because they know it’s the right thing to do.

“One of the things that defines Irish people through the centuries is to be leaders. Anywhere where we’ve gone around the world we’ve made a difference and it’s important that we should see that difference in our own country.”

Help is never more than a phone call away.