Irishman fights for life in Oz after seven-floor fall 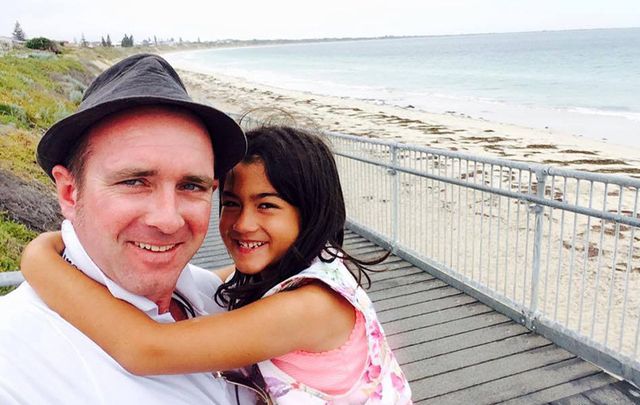 An Irishman who spent a year in New York before moving to Brisbane, Australia is fighting for his life after a horror seven-story fall from a building site that saw him land on his feet, suffering multiple injuries that left his medical team amazed he’s still alive.

Dave Conway, 37, a native of Dublin, fell from scaffolding while working on the side of a building on Monday, July 10. Conway has been living in Australia for eight years, and is married with a daughter who turned seven years old on the day of the accident.

The fall and his survival attracted significant media attention in Brisbane, which reported that Conway is no longer in an induced coma, but faces multiple surgeries and procedures that could keep him in hospital for up to a year.  One of those upcoming procedures will result in the loss of at least one of his feet.  On Tuesday, he endured nine hours of surgery on his shattered pelvis.

“He landed from the fall standing up straight.  That’s what saved him from death, but it also nearly destroyed him.”

Dave Conway fights for his life in hospital.

Ennis is one of the organizers of a YouCaring page to help the Conway family cope with the enormous financial obligations they’ll have to ensure David’s medial care going forward.  Virtually every limb and organ in his body was badly damaged, and there is a small bleed on his brain.  So far he’s had surgeries on his legs, his ruptured heart and ruptured lungs.

The photos on Australian TV of Conway in his bed are tragic, and unfortunately the road to recovery is only beginning.  Doctors are unsure if he will ever walk again.

Conway’s family – his parents and two brothers – immediately traveled to Brisbane after hearing the awful news.  Conway is married and has just the one daughter, and was happy with the life he created on Australia’s Gold Coast.

“You just don’t meet lads like David,” Ennis said.  “He’s lived and worked all over the world and really enjoyed New York when he was here. He’s a skilled tradesman and can do anything with his hands.  Even when he was young he could fix anything.”

Family is the most important thing in Conway’s world, Ennis added.  “He’s always posting photos on Facebook of his daughter Keisha and Viv, his wife. They are so happy.  We can’t believe this happened to him, but we are just grateful he is still alive and taking things one day at a time.”

There is no word on how the accident occurred but an investigation is ongoing.  His family and friends are shocked at the sudden turn of events that changed the course of Conway’s life, but they call him a “fighter” who will never give up.

“We’ll be with him every single step of the way.  No matter what,” Ennis says.

To contribute to the fund for Conway, visit www.youcaring.com/davidconway.