Co Waterford native Tom McGrath Jr only recently learned that his late father served in WWII and was awarded medals for his bravery. 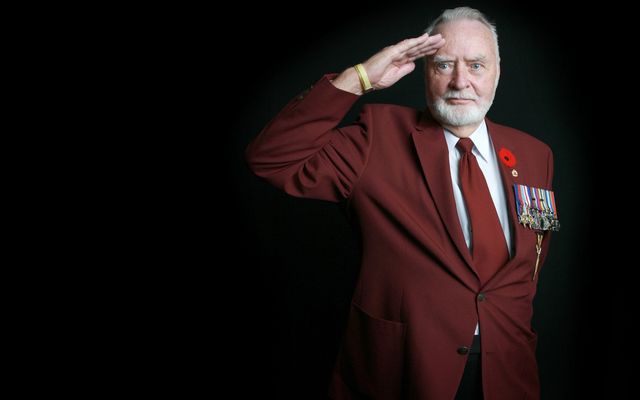 The son of an Irish WW2 hero has finally received the medals that his father never got the chance to hold.

The Irish Times reports that Tom McGrath Jr only found out about 2 years ago that his father, Tom McGrath Sr, fought during WW2. After both of his parents died when he was a teenager, Tom Jr emigrated to Spain and lost touch with his Co Waterford relations.

After meeting some of his first cousins for the first time, McGrath Jr learned the heroic tale of his father, Tom McGrath Sr.

UP NEXT: @susankeoghnews will be speaking to Tom McGrath Jnr, who today collected his dad’s World War II medals just two years after discovering his dad’s military past

An Irish emigrant in England at the time, McGrath Sr enlisted alongside the British when World War II first broke out. In 1940, the Waterford native was one of the few unlucky soldiers to be captured at Dunkirk and was sent to the German prisoner of war camp Stalag XXA in northern Poland.

On March 9, 1942, McGrath Sr, wearing a compatriot’s suit, found a gap in the camp’s wire and walked out with 200 Reichsmarks in his pocket, a supply of chocolate, and some soap.

McGrath Sr was sheltered by some locals before he was able to get a train to Berlin, a very risky move given the circumstances. From Berlin, he used a fake ID to get himself to Paris, where he arrived five months to the day after escaping from Stalag XXA.

From Paris, McGrath took another train to the Spanish border and proceeded to cross the Pyrenees, but was soon captured by Spanish authorities. He was imprisoned in Spain for about four months before receiving diplomatic assistance to be repatriated to Great Britain via Gibraltar.

Upon his return to Great Britain, the brave Irish soldier was awarded the Military Medal for his bravery in escaping the German war camp.

However, McGrath Sr was not there to receive it; he had journeyed back to his hometown of Portlaw in Co Waterford after a year of being back in Great Britain and never returned to military service.

Back in Waterford, McGrath Sr worked as a mechanic before meeting his wife, Elizabeth. Together, they set up a cafe in their village.

McGrath Sr died when his son Tom was only 16 years old.

“I had always had been looking for some trace of my family," Tom Jr said to The Irish Mirror.

Read More: An untold story of six Irish-American brothers who fought in WWII

"Through my son-in-law's father, I discovered cousins I never met and we became very close.”

"I was given a copy of that and was gobsmacked. He never spoke about the war or his experience.”

"I went to the national archives in London where I found his account of the escape.”

At the archives, McGrath Jr learned about the "abysmal" conditions his father and other captured soldiers endured in the camps.

Read More: Worth remembering on Veterans Day – the tale of two brothers in WWII

"What is consistent with all these stories that I have read about is that they didn't want to talk about their experience or relive it. That, compounded with the fact that he lived in a small town in southern Ireland in the 1950s and 60s.”

In his research, Tom discovered that his father had been awarded three medals: the Military Medal, the 1939-1945 Star, and the War Medal. However, since his father never returned to active duty, British military authorities would not release the medals.

Tom Jr appealed the ruling and won. He collected his father’s medals at a ceremony in Dublin last month.

"We are extremely proud and I am so happy," said Tom Jr.

"Like every child, you have your father on a pedestal and he was a strong man and loving man, and it's only since I found out what he has done do I know how high that pedestal is.”

British Ambassador to Ireland Robin Barnett said: "It's a wonderful story of an incredibly brave man.

"We have all seen the movies but we all know that the reality of escaping from a prisoner of war camp is something completely different.

"To get from Poland to the Pyrenees is something truly extraordinary."

“It is a celebration of his heroism and resilience. That’s what we will be celebrating. I’m also celebrating having discovered my Irish family.”