Plaque for Irish woman who shot Mussolini agreed for Dublin

Violet Gibson, a 50-year-old upper-class woman from Dublin, shot Mussolini in the face while he walked through the crowd at the Piazza del Campidoglio in Rome on April 7, 1926. 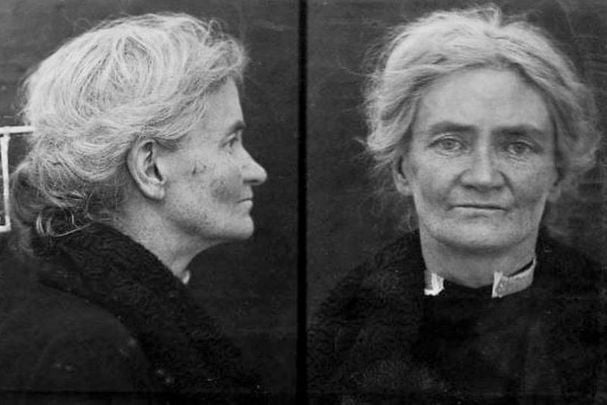 A police photograph of Violet Gibson taken after her arrest for the attempted assassination of Benito Mussolini in 1926. Public Domain

The Irish woman who shot Italian fascist dictator Benito Mussolini in the face is set to be commemorated with a plaque after the owners of her childhood home in Dublin approved plans for the memorial.

Dublin City Council (DCC) plans to honor Violet Gibson at her childhood home at 12 Merrion Square. The motion was introduced by independent councilor Mannix Flynn last year and approved by DCC in March. However, the proposals were subject to permission from the owners of the building.

David Palmer, the director of the UK-based real estate firm Westhill that currently owns the Georgian townhouse, said in a statement that the company was happy to accommodate the proposal.

"The owners of the company would be happy to accommodate a request by the council to install the plaque to Violet Gibson," Palmer said in a statement.

DCC has not given a timeline of when the plaque might be installed at the Georgian townhouse due to the ongoing public health restrictions.

Gibson, a 50-year-old upper-class woman from Dublin, shot Mussolini in the face while he walked through the crowd at the Piazza del Campidoglio in Rome on April 7, 1926.

It is believed that Mussolini moved his head at the last second, causing the bullet to merely graze his nose. Gibson attempted to shoot him again, but the second shot misfired.

She was set upon by the pro-Mussolini crowd and would have likely been lynched were it not for the Italian police, who stepped in and arrested her.

When presenting the motion last December, Mannix Flynn said that Gibson suffered "various cruelties and indignities within the fascist prison system" before she was deported to England to spare the Italians the embarrassment of a public trial.

Her family arranged to have her committed to a mental asylum - St, Andrew's Hospital in Northampton - as it suited both her family and the British authorities for her to be seen as insane rather than political.

She spent the rest of her life at St. Andrew's and died there in 1956, despite repeated calls for her release.

Donna Cooney, a Green Party councilor in Dublin, called for DCC to seek a posthumous apology from the British authorities for the treatment of Gibson. However, she was unsure who to seek an apology from.

"The [plaque] proposal was met with unanimous support by all the councilors," she said. "I remarked that she doesn’t seem to have ever been given a formal apology for her incarceration in a mental health facility for the rest of her life and that we should seek an apology for her. It seemed such a sad ending for her. A Dublin City Council assistant city librarian said he was not sure who would be the correct person to seek an apology from.

"The fact that she was an older woman and took this action to try and stop Mussolini even though she had been a pacifist seems admirable. Who hasn’t ever wished that the course of this dark history of Fascism had not been stopped sooner?" Cooney told the Sunday Times.