Five Irish tourists have been fined after police caught them, in their underwear and with beers in hand, climbing the Neptune fountain in Bologna, Italy on August 1. 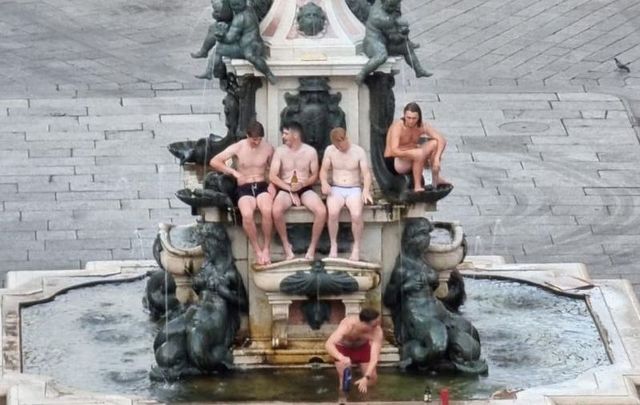 The Irish tourists were quickly apprehended and fined for scaling the Neptune Fountain in Bologna, Italy. Alberto Aitini, Facebook

Five Irish tourists have been fined after they stripped down to their underwear and mounted the Neptune Fountain – also called The Giant - in Bologna, Italy over the weekend.

Alberto Aitini, a local politician, posted about the incident on his Facebook page on August 2.

He said saying at around 5 am on Sunday morning, “five young Irish tourists, under the influence of alcohol,” climbed the Neptune fountain, which was completed in 1565.

The politician said that “thankfully” the alarm on the fountain was triggered and local police immediately responded to the scene.

The five Irish tourists were each fined €500 each. “Fortunately,” Aitini writes, no damage to the historic monument was recorded.

A translation of his post adds: “It's pretty depressing (as well as outright infuriating) that we need video surveillance and alarm systems to ensure what would be behavior dictated by the simplest common sense, good manners, intelligence.

“But in order to take better care of our common heritage, we have invested a lot in technology these years and this allows time to have local police or law enforcement intervened timely.

“And for this reason, we will continue to implement all the necessary means to safeguard our beautiful city.”

According to The Sunday World, local reports say that the Irish lads were attempting to recreate a scene from the 1960 film La Dolce Vita in which two characters strip and wade into the Trevi Fountain in Rome.

The fountain featured in the film is 400km away from where the Irish lads attempted their recreation.

Another witness to the scene told The Sunday World that she saw one of the lads slip and injure himself on the wet marble of the fountain.

Two of the men allegedly tried to flee the scene but were ultimately apprehended a few hundred yards away.