Irish tourist board under fire for using "Londonderry" in online quiz

Tourism Ireland, which promotes tourism across the island of Ireland, has subsequently advised staff to refer to Derry as "The Walled City" amid rising criticism. 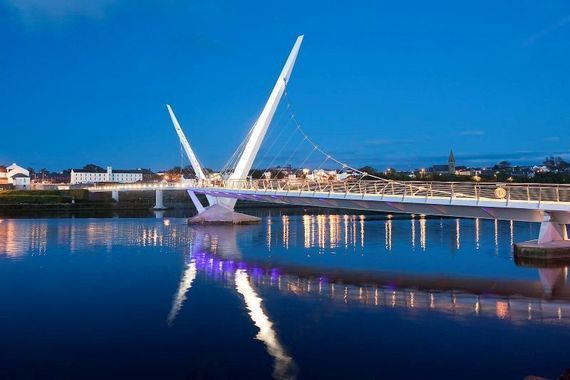 Tourism Ireland has come under fire for using the name "Londonderry" in a social media quiz earlier this year.

In an internal memo, the tourism board advised staff to refer to Derry as "the Walled City" amid rising criticism on social media.

The state body, which promotes tourism across the island of Ireland, provoked controversy after a question in a social media quiz asked in which county had Seamus Heaney grown up. Some participants took issue with the use of Londonderry as one of the answer options.

The quiz was run by a creative agency on Tourism Ireland's corporate Instagram account in May, but the issue has recently flared up again on social media.

"It has since been deleted but seems to be getting some pick-up on Twitter," an internal Tourism Ireland email noted.

Tourism Ireland has received dozens of complaints about the quiz, with one person stating that they were "taken aback" by the use of the name Londonderry.

"Nobody in the 26 counties refers to it as Londonderry and less than 50pc of the six counties do," another complainant said.

In response, Tourism Ireland said that its job was to promote the island of Ireland as a tourist destination for international visitors and said that it stuck with the "official names of towns and cities in the given jurisdiction".

However, the tourism board advised staff to avoid referring to the city as Londonderry on social media, according to an internal email obtained by the Irish Independent under the Freedom of Information Act.

"We do call it Londonderry officially on ireland.com — it’s just slightly different on social media where I guess we have a large Irish and UK following who’d pick up on this more than our international audience," the email said.

The naming of Derry City has been a source of contention and dispute for decades.

The city has been officially known as Londonderry since King James I granted the city a Royal Charter in 1613. However, the name of the city's nationalist-dominated council became the Derry City Council in 1984, while the local government area is called the Derry and Strabane District Council.

The city center is still officially referred to as Londonderry, while a High Court judge ruled in 2007 that the city's name can only be officially changed by legislation or Royal prerogative.

The Stormont Government voted against changing the city's name in 2015 amid a Sinn Féin campaign to drop references to London.