RNLI rescued four people - two young girls who drifted to sea and two men who went to rescue them - at Silver Strand Beach in Co Wicklow. 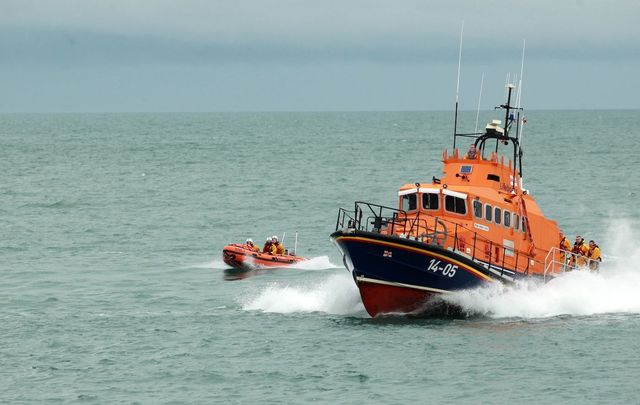 An RNLI lifeboat in action. RollingNews.ie

Ireland's national lifeboat service has warned against using inflatable toys at sea after two teenage girls drifted out to sea on a rubber ring in County Wicklow on Sunday.

Ireland's Royal National Lifeboat Institution (RNLI) rescued a total of four swimmers from Silver Strand beach in Wicklow on Sunday evening after two men went to the aid of two girls who had drifted out into the water and managed to get them onto nearby rocks.

RNLI said afterward that the two young girls were then transferred to the Coast Guard helicopter and flown to Dublin Airport, where they were met by an Ambulance crew and brought for further medical attention.

The two men who had rescued the two girls did not require any further medical assistance and were brought back to Wicklow harbour for a well-deserved hot drink at the lifeboat station after their quick intervention to help the young girls.

Speaking after the callout, Wicklow RNLI Press Officer, Tommy Dover said, "The quick actions of the two swimmers who went to the aid of the young girls resulted in a positive outcome this afternoon and we would urge people not to use inflatable toys on the beach."

Wicklow RNLI lifeboat operating manager Mary Aldridge said that the girls were traumatized by the incident and said that the quick thinking of the two men on the beach may have saved their lives.

"They were very traumatized. They were two lucky girls, they had lots of cuts and bruises from the rocks," Aldridge told RTÉ Radio One's Morning Ireland.

"It’s lucky for them that the two men on the beach with their families went to their aid and that our lifeboat and Wicklow coast guard and the rescue 116 helicopter did too.

"Only for their quick actions, it would’ve been a different result."

Aldridge urged people not to use inflatables at the beach, stating that they can be "lethal" in certain conditions.

She said that Sunday was a "sunny but windy day" and that gusts can take people 100 meters from the shore without them realizing it.

"We have seen crocodiles, flamingos, unicorns, dinghies, lilos. When they are used on the sea they can be lethal."

Aldridge said that inflatable toys are ideal for swimming pools and encouraged people to use them there.