Ruairí McSorley, who famously said "you wouldn't be long getting frostbit" in a viral video from 2015, was hypothermic, exhausted, and surrounded by a pod of dolphins when he was rescued by Fenit RNLI crew members. 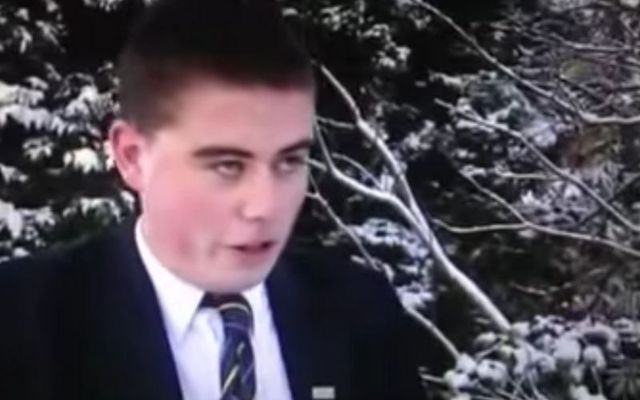 A stranded Irish swimmer who shot to prominence as "frostbit boy" in 2015 was rescued off the coast of Kerry on Sunday night after spending a staggering 12 hours at sea in nothing but a pair of swimming trunks.

The man has been identified as 24-year-old Ruairí McSorley from County Derry, who went viral in 2015 after he gave a TV interview in Northern Ireland where he famously said "you wouldn't be long getting frostbit".

Members of the Fenit RNLI lifeboat pulled McSorley from Tralee Bay at 8:15 p.m. on Sunday, more than 12 hours after he entered the water at Castlegregory Beach at 8 a.m.

McSorley was hypothermic, exhausted, and surrounded by a pod of dolphins when he was rescued. He was also more than 2.5 miles away from the shore at the time of the rescue, which has been described as a "miracle".

He told rescuers that he intended to swim 9km from Castlegregory Beach to Mucklaghmore Rock.

McSorley was found after an extensive rescue effort from Fenit RNLI and R118 Coastguard, with volunteer Jackie Murphy crediting the "brilliance" of RNLI coxswain Finbarr O'Connell.

O'Connell studied tides in the area and charted where McSorley was likely to be across the vast expanse of Tralee Bay.

O'Connell told the Irish Independent that McSorley was lucky to be alive and said that he would have drowned if the RNLI took an extra 30 minutes to find him.

"He was very, very lucky. There is no doubt about it. Another half an hour, and he was a goner. None of us or the medics can believe he ­survived it," O'Connell told the Irish Independent.

"He was only wearing a pair of trunks. He had no wetsuit. Nothing. He must have been a good swimmer because he was just over two and a half miles (4km) from the beach."

O'Connell said that the McSorley's body temperature had plummeted and added that his survival in the water for more than 12 hours astonished medics who attended the rescue.

The RNLI coxswain also recalled the elation of observing the McSorely's head bobbing in the water after crew members initially thought that he was a seal.

"But then he put up his hand. It was a great, great moment for us," he told the Irish Independent. "The elation of seeing somebody floating alive in the water, rather than the other way, is so great. We have had too many bad outcomes, so it was absolutely fantastic to pick him up."

O'Connell modestly downplayed his heroics in the rescue and refused to take all the credit. Instead, he heaped praise on his "excellent" team and said that crew members are training all the time for rescues such as this.

He said that he was able to chart the swimmer's course by drawing on RNLI training, which operates by throwing a mannequin in the water and observing how far it has drifted after several hours.

"We have a mannequin we throw in the water, which (behaves) like a person in the water. Then we go away and do an exercise for a few hours, and we see how far it has drifted. When we pick it up, we note in the chart which way the tide is going. So we applied that knowledge yesterday."

O'Connell said that McSorley was incredibly lucky to survive the ordeal and urged swimmers to exercise caution when swimming at sea.

He encouraged anyone wishing to swim at sea to always let someone know where they are going and at what time they are due back.

McSorley told the Irish Independent that he decided on the spur of the moment to swim out to Fenit Lighthouse and didn't tell anyone where he was going.

"I saw Fenit lighthouse out in the water, and I said, right I’m going towards it. I wouldn’t have got in to start with if I didn’t know I was going to be grand," McSorley said.

He told the Independent that he feels "100 percent" after the ordeal and said that he had suffered "no long-term damage".

"The only thing was my kidneys needed to readjust, so there has been no serious harm. It was only a matter of going into the hospital to heat up a bit. Other than that, I was fine."

McSorley was discharged from hospital on Tuesday.

A dog walker found McSorley's abandoned clothes at Castlegregory Beach at around 11 a.m. and requested Fenit RNLI to launch a rescue operation.