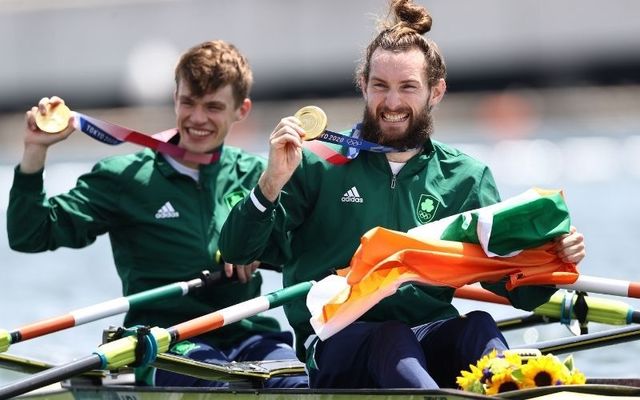 O'Donovan and McCarthy were made to work for their piece of Irish sporting history at the Sea Forest Waterway on Thursday morning, edging out German duo Jonathan Rommelmann and Jason Osborne who pushed them all the way.

It was the German underdogs who took the early initiative, racing ten lengths and 1.4 seconds clear of the Irish favorites at the 500m mark.

However, the Irish crew's strategy has always been to hit their stride between the 500 and 1500m mark and they began to gradually reduce the distance between the two boats until they were 0.62 of a second behind at the midway stage.

O'Donovan and McCarthy took control of the race after the halfway stage and caught the Germans just before the 1500m mark, finally pulling clear inside the final 500 meters.

The Germans briefly drew level again, but O'Donovan and McCarthy upped their speed and stroke rate once more to fend off the challenge and finish more than half a boat length in front, winning by 0.86 of a second.

"The race plan we had, we do it all the time and it seems to work out okay for us," O'Donovan told RTÉ Sport after the race.

"We kind of knew that Italy and Germany always go hard, you can count on that. Then they slow down a bit. Once we were catching up to them, we knew that we were at a sustainable pace and kept going. Germany made it hard for us, that's for sure."

President of Ireland Michael D. Higgins paid tribute to the rowing duo for their "tremendous achievement" on Thursday morning.

"After the magnificent success in women's rowing yesterday, today we celebrate Ireland's first Olympic gold medal in rowing, won so deservedly by Paul O'Donovan and Fintan McCarthy in the lightweight double sculls," Higgins wrote on Twitter.

"Theirs is a tremendous achievement, which gives great inspiration to young people and aspiring athletes all over Ireland."

“After the magnificent success in women’s rowing yesterday, today we celebrate Ireland’s first Olympic gold medal in rowing, won so deservedly by Paul O'Donovan and Fintan McCarthy in the lightweight double sculls.”

Taoiseach Micheál Martin also described the win as an "outstanding gold medal" and a "breathtaking victory".