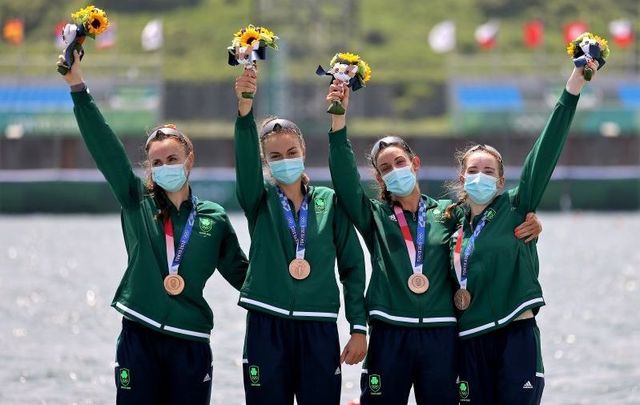 Ireland has won its first medal at the 2020 Tokyo Olympics as Emily Hegarty, Fiona Murtagh, Eimear Lambe, and Aifric Keogh claimed Bronze in the Women's Four rowing on Wednesday.

The medal-winning Irish Olympians finished in third place with a time of 6:20:46, just five seconds behind Silver medalists the Netherlands, who was less than a second behind Gold medalists Australia.

The female rowers' Olympic medal, of course, wasn't a given. The team only qualified at the last chance back in May and Wednesday's race was dramatic.

Padraic Daly of Rowing Ireland notes: "Inside the last 500m, Great Britain and China were sharing third, until Hegarty upped the rate to 43, and the crew responded, timing their attack to perfection.

"While Australia struck the killer blow to take gold ahead of the Netherlands, Ireland came storming back from fifth place to blow away China and GB and claim the bronze."

After the big win, Hegarty told The Irish Times: “We could never experience anything like this again, so it’s a case of enjoying it, living in it, it’s once in a lifetime.”

Reflecting on the race, Keogh said: “It was a bit touch and go.

"Throughout the race, I was like, ‘we could be fourth, fifth’. Eimear makes the strategy calls, and I tell us where we are in the field. I was looking out and I was like ‘Oh god’ in my head –we were slipping back but we said to ourselves if that happens we go early, and in the last 1km we backed ourselves."

Murtagh said: “We definitely didn’t make it easy, but Eimear made the call, and we just all backed ourselves, backed each other, stayed really loose, and just went for it.”

“It’s something for the future," Lambe said, "and hopefully this will be the first of many, and hopefully it gives the young girls coming up now a bit of hope that this is completely possible. If we can do it anyone can. Even though we were down we knew to back ourselves."

As expected, the female Irish rowers were met with rounds of congratulations.

While you were sleeping…

The Women’s Four smashed their final this morning in Tokyo with an unbelievable finish seeing them home to an Olympic bronze medal ?????#TeamIreland #Tokyo2020 pic.twitter.com/M66mxB41mu

Rowing Ireland noted how the four women made history:

First female athletes to win an Olympic Medal in rowing for Ireland ????

History has been made by this incredible crew ??#wearerowingireland pic.twitter.com/QIsVMX09jE

Ireland's Embassy in Japan said that the future is bright for Irish rowing, and noted that Ambassador Paul Kavanagh was on hand to cheer the rowers along:

You can watch the RTE's interview with the Bronze medal winning Irish Olympians here: