Priest who went against West Palm Beach Diocese order to cover up predator granted right to sue after being disciplined. 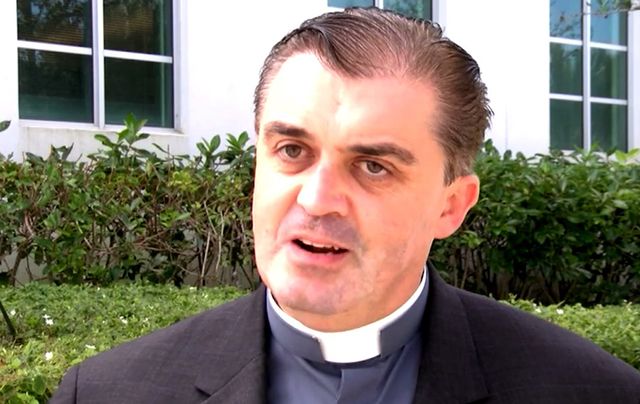 An Irish priest has been given permission by a US court to sue the West Palm Beach diocese over defamation.

Father John Gallagher, a Tyrone native, claimed the Florida diocese tried to cover-up a pedophile priest in the diocese. Gallagher exposed him and was shunned and defamed as a result.

In January 2015, Gallagher (49), who has served in Florida since 2000, helped to report criminal misconduct by Fr. Jose Palimattom, a priest of the Franciscan Province of St. Thomas the Apostle in India, who was serving a two-year residency at Holy Name of Jesus Parish, in West Palm Beach.

Palimattom, who had been at the parish for just one month, approached a 14-year-old boy one day after Mass and showed him as many as 40 images of naked boys. Police later classified this as an attempt to “groom” the boy for future encounters.

Gallagher claims that he went against a church official’s instructions to put Fr. Palimattom on a plane to Bangalore and “not keep written notes” of the incident. Rather than following the Church’s instruction to “make him go away,” Gallagher interviewed Fr. Palimattom along with one of his parishioners, a retired police officer, who took notes at the meeting.

Palimattom admitted to showing nude pictures of boys to the teen. He also admitted that he had sexually assaulted boys in India before arriving in the United States. A few hours later he repeated this confession to detectives from the specialist unit of the West Palm Beach Police.

At the time, the Palm Beach diocese released a statement saying that despite prior investigation they had no knowledge of Palimattom’s previous assaults in India, despite conducting a background check.

ABC news reported that Palimattom admitted the prior assaults, saying they were not on record as they had not been reported to police. It was also claimed by the media that Palimattom was under orders from the Church to avoid being in the company of minors without other adults in attendance.

Then, in what the Palm Beach Post described as “an extraordinary public rebuttal,” the Palm Beach Diocese has stated that they are “very disappointed in the actions of Father John Gallagher who, through a complete misrepresentation of the case of Father Jose Palimattom, has brought unfair and slanderous allegations against the Church and the Diocese of Palm Beach.”

They further suggest that this is not the first time they have been “disappointed” by Fr. Gallagher, claiming that he has “acted in a manner in other situations in the past and has been given every opportunity for correction, including the possibility of professional assistance,” and imply that the Irish priest greatly exaggerated his role in reporting Fr. Palimattom’s crime to authorities.

“The only reason that this is going on is that John is very upset and angry that he was not named pastor. That’s the bottom line. He wanted to be pastor of Holy Name so bad,’’ said Father Nestor Rodriguez, pastor at St. Ann’s Church in West Palm Beach. “John is a disgruntled employee of the diocese. He needs serious professional help.’’

The Palm Beach Post investigation discovered many claims that Gallagher was anti-Hispanic and treated church personnel badly. The paper also reported an allegation that “he transformed the living room of his parochial house into a piano bar where church employees served drinks and cleaned dishes at “high roller” parties he hosted for friends and parishioners.”

The Gallagher defenders state the fact that police have praised Fr. Gallagher for his help with the case, writing to Church leaders including Boston’s Cardinal Sean O’Malley, the head of the Pontifical Commission for Child Protection, a group established by Pope Francis in 2014 shows he is right in feeling persecuted.

The Chief Deputy in the Palm Beach County Sheriff's office Michael Gauger, who has been a cop for 44 years, wrote, “Due to Fr. Gallagher's co-operation the case was swiftly resolved and the opportunity for additional crimes was diminished.

He urged Cardinal O'Malley to ensure the Irish priest received “accolades for his compliance with criminal investigators” and note that this was not the first time that the Church has impeded investigations.

The diocese, however, contents that “Father Gallagher is blatantly lying and is in need of professional assistance as well as our prayers and mercy.”

The diocese also expressed disappointment in the media’s handling of Fr. Gallagher’s complaints, adding “The Diocese is very concerned regarding the manner in which the media is presenting this case, especially when the Diocese had released to it information that should have caused more than reasonable caution in presenting misleading information from Father Gallagher.”

Gallagher has claimed that the Bishop of Palm Beach, Gerald Barbarito, demoted him instead of giving him a promotion he was in line for, blocked his access to his parochial house after Gallagher had spent time in hospital recovering from a heart attack, and placed him on extended medical leave.

This week a judge ruled Fr. Gallagher could sue the Diocese of Palm Beach for defamation for allegedly calling him a liar who needed ‘professional assistance.’

Judge Meenu Sasser rejected the claim by the diocese that the separation of church and state applied and it was an internal church matter.

Speaking to the ‘Derry Journal’, Fr. Gallagher said the ruling was a ‘relief’ and he hoped the defamation trial would ‘bring closure.’ “This ruling is now going to be case law and will set a precedent for other cases here in the U.S.,” he stated. Fr. Gallagher told the ‘Journal’ the ruling was on the same day as the 25th jubilee of his ordination. “Instead of celebrating, as others do, I spent it in the courthouse of West Palm Springs where my future was being decided,” he concluded.