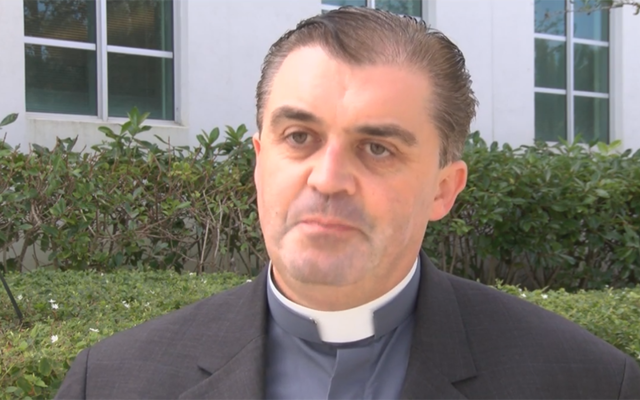 Father John Gallagher from County Tryrone believes he's being punished by the Catholic Church for reporting a pedophile. CBS12

A Florida priest has claimed the Church is punishing him for turning in a visiting priest who showing pornographic images to a 14-year-old teenager.

The diocese hit out with an unusually strongly worded statement, insisting that Fr John Gallagher was “blatantly lying” and “in need of professional assistance” for accusing the Church of asking him to obstruct law enforcement.

Speaking at a press conference after he filed a claim for defamation Fr Gallagher told assembled journalists, “Today is a sad day. Thirty years of my life has been destroyed by the Roman Catholic Church.”

The clergyman who hails originally from Strabane, Co Tyrone claimed further that after he suffered a heart attack earlier this year he returned to his home in the parish, only to find that the locks had been changed a new priest installed.

The diocese says Fr Gallagher was not demoted but instead had been moved to a new parish, which also came with a parochial home attached to it.

The priest’s actions drew praise from law enforcement who said, “Father Gallagher’s immediate cooperation should be recognized by the Catholic Church and he receive accolades for his compliance with criminal investigators.’’ He alleges his behavior was met with hostility within the church hierarchy.

He told that Palm Beach Post that when he was discussing the case with an official she told him, “We don’t have to share all of that information.’’ To which he replied, “Are you asking me to obstruct an ongoing criminal investigation?” Followed by silence. “I said, ‘Good, because I’m cooperating with law enforcement.’”

Despite this, Fr Gallagher says he did get a call from his local Bishop Gerald Barbarito, who praised him “for taking care of the situation.’’

The priest in question, Jose Palimattom, was subsequently jailed for six months in prison with a further year on probation for the crime of showing indecent images to a minor.

Fr Gallagher says the incident has shown the Church has learned nothing from past scandals and his treatment will only compound their problems. “Based on the experience I’ve had, what priest would ever be a whistle blower now? What parent would let their son go into the priesthood if they’re going to end up like this? It is obvious to me that I am being silenced and hidden for my actions taken to ensure the safety of my parish and diocese,” he said.

With his defamation case now winding its way through the Florida court system, the Catholic Church looks set to contest the allegations strongly.

“The Diocese of Palm Beach acted in a prompt, thorough, and cooperative manner in regard to Father Palimattom,” they said in a statement. “Father Gallagher was not in any way demoted or removed because of the incident. He was not named as pastor of Holy Name of Jesus Church for a number of reasons not related to the incident involving Father Palimattom.

“He was given a new assignment with all the reasons explained to him. Access to his residence was never denied him, nor was he refused the sacraments.”

A date for the case has not yet been set.