Irish people outpace their European counterparts when it comes to interest levels in news, the Broadcasting Authority of Ireland (BAI) has found. 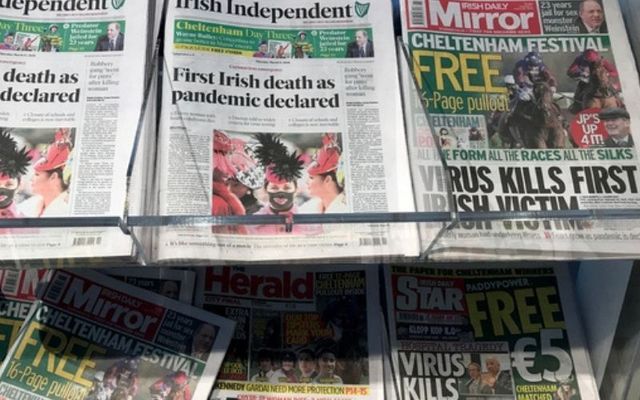 Irish newspapers on the day of the Ireland's first Covid-19 death on March 12, 2020. RollingNews.ie

New research has found that Irish people have higher levels of interest in the news compared to other countries.

Roughly 70% of Irish people are "extremely" or "very interested" in the news, trumping several European nations, including the United Kingdom, Austria, Denmark, and Greece. according to recent research published by the Broadcasting Authority of Ireland (BAI).

The research also found that high-income earners continued to be the group that was most interested in the news, although the gap between high and low-income earners is closing.

There was a 25% difference between the two wage groups in 2020, compared to just a 14% difference last year.

Overall, the majority of people who responded to the study said that they do not trust news on social media, although levels of mistrust have declined since 2020.

More than 60% of respondents had concerns about the accuracy of news content they read online.

The BAI report additionally found that the gap between Irish men and women's interest in the news is closing, while Irish men are more likely to comment on a news story they see online.

Meanwhile, 66% of Irish men believed that there was an appropriate level of coverage of their gender in the news, compared to 62% of Irish women.

On the other hand, 13% of Irish men believed that there was "too much" coverage of their gender, compared to just 6% of Irish women.

Dr. Dawn Wheatley at Dublin City University, an assistant professor at DCU who led the research, said: “The findings from this project were hugely interesting.

"We hope that this project will help to create awareness amongst news providers about how news and current affairs are consumed differently by men and women, and by people from different backgrounds, and that it will help them to tailor their news offerings to widen interest. This, in turn, will facilitate democratic debate and active citizenship.”