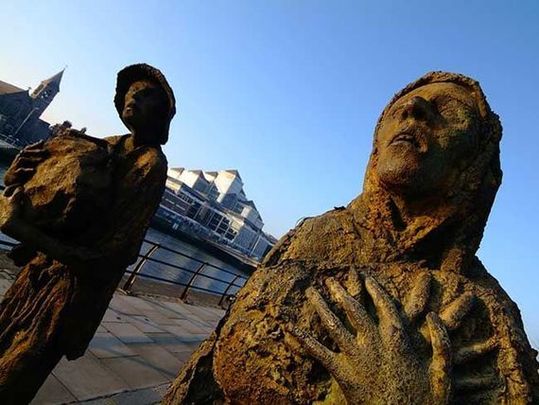 Irish people are supporting a GoFundMe providing relief to the Navajo and Hopi families which has raised more than $1.4 million.

The donations are directly related to the Famine in 1847 when the Choctaw Nation heard about Ireland's plight and generously donated $170 (around $5,000 today) to the cause.

Around 60,000 Native Americans, including the Choctaw people, had just suffered through the Trail of Tears which made them empathetic to Irish people suffering the worst effects of the Famine.

The Choctaw, who had just relocated to Oklahoma from their ancestral home in Mississippi, dug deep for people thousands of miles away who they had never heard of.

Read more: Great similarities between experiences of the Irish and Native Americans

A spike in COVID-19 cases on the Najavo and Hopi reservations threatens to devastate the Navajo people unless they can get outside help.

The rise in cases is partly linked to a lack of running water in a number of Navajo homes.

Around 40% of Navajo homes lack proper running water and part of the GoFundMe campaign is going toward bottled water.

Food, including fresh fruit and bread, is also being sent to the Navajo people as part of the campaign and more than 250 food packages were delivered to Hopi Village on May 3.

Vanessa Tulley, who helped set up the GoFundMe, said that a significant amount of recent donations were inspired by the Choctaw generosity during the Famine.

"173 years later, the favor is returned through generous donations from the Irish people to the Navajo Nation during our time of crisis," Tulley wrote on the GoFundMe campaign.

She thanked Irish people for their generosity.

"In moments like these, we are so grateful for the love and support we have received from all around the world.

"Acts of kindness from indigenous ancestors passed being reciprocated nearly 200 years later through blood memory and interconnectedness. Thank you, IRELAND, for showing solidarity and being here for us."

Irishman Pat Hayes, who donated to the relief fund, said: "From Ireland, 170 years later, the favor is returned! To our Native American brothers and sisters in your moment of hardship."