Elsa Desmond made history when she became the first-ever Irish Olympic athlete to compete in the luge event on Monday at the 2022 Winter Olympics in Beijing. 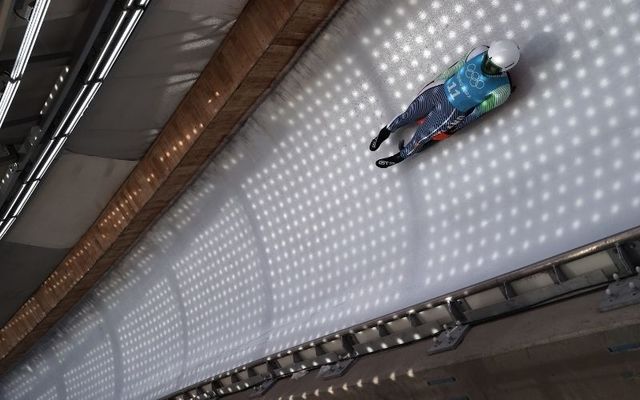 Elsa Desmond became the first-ever Irish Olympic athlete to compete in the luge event on Monday at the 2022 Winter Olympics in Beijing.

In her first run, Desmond scored a personal best by 1.2 seconds with a finishing time of 1.01.68, which was 3.263 behind the leader resulting in a rank just ahead of Moldova.

However, a more disappointing second run saw Ireland’s first Luge Olympian fall behind marginally going into Run 3, with a time of 1:03.857, resulting in a total of 2:05.465 overall.

Elsa Desmond posted a huge personal best in her Olympic debut in Luge, knocking 1.2 seconds off her best in the 1st run. The 2nd run wasn't what she hoped it would be. She goes into tomorrow 34th overall with 2:05.465.#TeamIreland #Beijing2022https://t.co/kIu4VocOkh pic.twitter.com/7045HUS23s

Speaking after her second run, Desmond reflected on some of the positives from her first Olympic competition: “I have so many emotions right now. I have just made history, I have just become an Olympian, it’s just amazing.

"When I finished that first run, the emotions! It was just the most amazing feeling. I got a personal best by 1.2 seconds, which in this sport is amazing. I was so happy! It’s just a disappointment on the second run, but I kept the shiny side down, so I guess that’s something to be grateful for!"

She added: "My start wasn’t good. I went into that first corner on the right-hand side which is not where you want to be. This pushed me late into the second corner, and there wasn’t really much to salvage it at that point. The ice was really hard and it’s really skiddy, which means that when you get a hit like that it can take a bit of time to get it back under control. And I just didn’t really feel settled in the sled after that, and nothing quite clicked."

Desmond, who qualified as a doctor during the COVID-19 pandemic, set up the Irish Luge Federation from scratch and was Ireland's flag bearer at the opening ceremony on Friday night.

The #TeamIreland athlete will be competing in run 1 and 2 in the Women’s Singles #Luge at the Winter Olympics #Beijing2022  today pic.twitter.com/GCKSi8Ii8w

Desmond's historic appearance on Day Four of the 2022 Winter Olympics followed a disappointing day for Team Ireland on Day Three. Alpine Skier Jack Gower placed 31st in the Men's Downhill on a challenging course that started at 2,179m in altitude with a vertical drop of 894m over a distance of 3,152m course.

Gower produced a good clean run in the race and posted a time of 1.47.61, finishing 4.92 seconds behind the eventual winner Beat Feuz of Switzerland. France's Johan Clarey and Austria's Matthias Mayer came in second and third place respectively.

Gower, an Olympic debutant and a former Junior World Champion, said he was disappointed not to finish higher.

"I’m pretty disappointed with today, but I’m lucky I have more events and I’ll try and do a better job in the next few days," Gower said.

Gower will be competing in Super-G on Monday, which is a similar but more technical event, with the gates placed closer together.

"I’m definitely skiing a higher level in Super-G than Downhill, so we will see what happens tomorrow, but I will be looking forward to that one."

Jack Gower jumps up six places from his starting position to finish 31st overall in the Men’s Downhill. Another technical course and a solid start for Jack as he approaches his strongest event, the Super-G.

Meanwhile, fellow Alpine Skier Tess Arbez clipped a gate in the Women's Giant Slalom on Sunday, resulting in a DNF.

"I feel really disappointed right now, the conditions were so tricky out there, it was very icy. A lot of people came down, and it felt very different to how it was the past few days," said Arbez, who is competing at her second Winter Olympics.

Tough day in the office for Tess Arbez, with a DNF in run 1 of the Women’s Giant Slalom.

In tricky conditions on the course aptly named ‘Ice River’ she crashed in the second intermediate and will now have to refocus for the Slalom on Wednesday #TeamIreland #Beijing2022 pic.twitter.com/MZdmevExqH