Rachael Blackmore became the first woman to ride a winner in the 182-year history of the Grand National when she guided Minella Times to victory on Saturday. 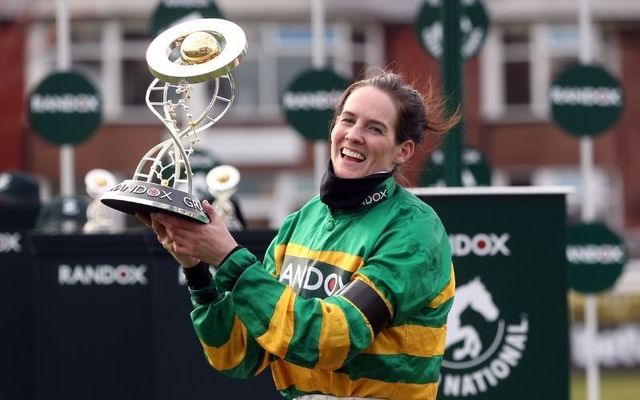 Irish jockey Rachael Blackmore became the first woman in history to win the English Grand National at Aintree when she rode Minella Times to victory in a compelling race on Saturday.

The Tipperary jockey, who became the first woman in history to win the Champion Hurdle at Cheltenham last month, rode the 11/1 shot for Irish trainer Henry de Bromhead in the four-mile race on Saturday afternoon. De Bromhead also trained the 100/1 outsider Balko Des Flos, who finished second in the prestigious race.

"This is the Aintree Grand National, I'm completely blown away," Blackmore said in an emotional interview following the historic victory.

"I got a fantastic passage the whole way. Minella Times was unbelievable, he jumped fantastic, I don’t think he missed a beat anywhere.

Blackmore took Minella Times into the lead before the final fence of the National and became the first woman in the race's 182-year history to ride a winner at the most famous steeplechase race in the world. However, the 31-year-old jockey modestly downplayed her historic achievement.

"This is a massive deal for me personally, not the fact I’m a female. The thing that hit me when I crossed the line was that I’d won the National, not that I’m the first female to win the National. I’m just delighted."

? History in the Grand National@rachaelblackmor becomes the first female rider to win the £750,000 Randox Grand National aboard Minella Times @AintreeRaces

Limerick businessman JP McManus owns Minella Times and Blackmore said that it was a "privilege" to win the historic race for him.

"They’ve had a tough year, so hopefully this can make things a little easier," Blackmore said, referencing the sudden death of McManus's daughter-in-law in Barbados over Christmas.