The anti-terrorist Special Criminal Court has confirmed that it will hear the trial of former Irish Defence Forces member Lisa Smith for her alleged part in ISIS terrorism. 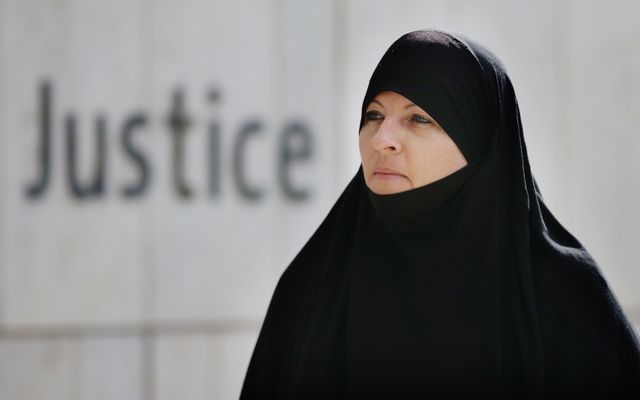 Lisa Smith, charged with membership of the Islamic State terrorist group and with financing terrorism. RollingNews.ie

Former ISIS bride Lisa Smith, who once worked with the Air Corps on the Irish government jet, received the court confirmation in her absence on Monday.

Lisa Smith, from Drogheda, County Louth, had already been charged with membership of the Islamic State terrorist group and with financing terrorism at lower District Court sittings last December and in July.

In a special formal process, the Director of Public Prosecutions applied on Monday for the trial to be heard at the non-jury Special Criminal Court.

The prosecution was the only side present at the hearing, although at one earlier sitting in a lower court Smith’s defense solicitor Peter Corrigan said the application to have the trial in the Special Criminal court was a denial of her right to a trial by jury.

In certain cases, the  Director of Public Prosecutions can certify an opinion that the ordinary courts are inadequate to secure the effective administration of justice and apply for the trial in the non-jury Special court.

The mother of one Smith, 38, who is on bail, will be required to be in court for the next sitting when the case is listed for mention on September 14.

Last December, Smith was initially charged with being a member of the unlawful terrorist group ISIS between October 28, 2015, and December 1, 2019, an offense that carries a 10-year sentence.

On July 24, a further charge was brought of financing terrorism by sending €800 in assistance, via a Western Union money transfer, to a named man on May 6, 2015.

Smith, from Dundalk, Co. Louth, was brought back to Ireland last December with her toddler daughter after trekking from war-torn Syria to Turkey.

After a four-week stint in custody on remand, she was released on bail with a list of strict conditions including internet and social media ban.

Her solicitor said Smith was anxious to prove her innocence.  He said at the time that she had come back to Ireland after walking with her two-year-old daughter “through bombs, poverty, and cesspit camps, and desert, to come to her country of origin.”

The Special Criminal Court was established in 1939 and was re-established under government proclamation in 1972 shortly after the outbreak of Troubles in the North.

Its aim is to try terrorist-linked offenses, but in recent years it has also tried gang crimes where the prosecution believes witnesses face threats.