The proposal to place the Circle of Heroes, the new essential workers memorial, adjacent to the Irish Hunger Memorial is being met with fierce pushback. 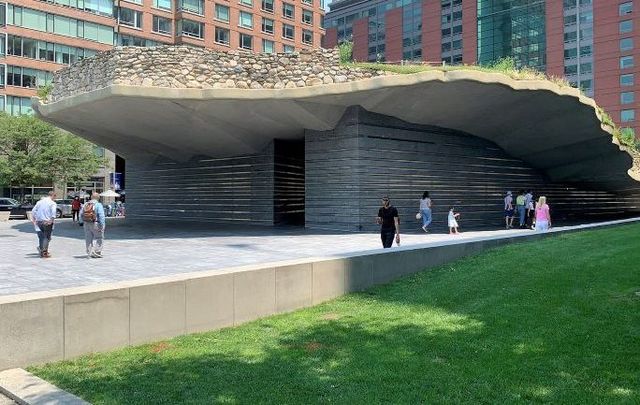 However, one of the two proposed locations of the Circle of Heroes is being met with fierce opposition amongst the Irish and Irish American communities due to its proximity to the Irish Hunger Memorial.

“The Commission of labor leaders representing all essential workers have chosen a location in Battery Park City to install the monument,” the governor’s statement issued on June 23 read.

“The location in Battery Park City is along the water, in view of the Statue of Liberty,” the statement added. “This spot is easily accessible to New Yorkers and visitors in a highly-trafficked part of the park.”

Not included in the initial wave of pushback is the Irish Consulate in New York City. A staff member told IrishCentral on Wednesday afternoon that while the Consulate had fielded several calls about the matter, it was waiting until it learned more details about the proposed memorial before responding.

Wednesday's conference call, which ran more than five hours, heard plenty of concerns not only about the proximity to the Irish Hunger Memorial, but also that the project is being rushed, does not appropriately engage with local residents, and does not best represent the honors that New York’s essential workers rightly deserve.

Notably, the vast majority, if not all, of the people who dialed into the call were in opposition to the Circle of Heroes memorial for one reason or another.

During the call, it was confirmed that following public feedback there are two sites being considered for the location of the Circle of Heroes - adjacent to the Irish Hunger Memorial, and Esplanade Plaza.

The renderings of the proposed site adjacent to the Irish Hunger Memorial, which are still a “work in progress,” were presented during the call and showed a roughly 8,000 square foot area between the Irish Hunger Memorial and 300 Vesey Street that would feature maple trees, flagpoles, benches, an eternal flame, and plaques for each of the main essential worker groups.

Kelly Anne Reynolds, who was on Wednesday’s conference call, told IrishCentral that she has been trying to rally Irish and Irish American groups “to advocate for slowing down this new proposed and poorly planned monument.”

A lifelong resident of Battery Park City who is now an Irish historian, Reynolds said on the call that the Irish Hunger Memorial “represents a massive trauma for a huge group of Americans and their ancestors who were forced to emigrate due to mass starvation as a result of crop failure.

“It was chosen for that spot due to the overlooking view of Ellis Island and toward New York Harbor, that fact alone is poignant.”

Reynolds highlighted the link between the Irish Hunger Memorial and 9/11. On the morning of September 11, 2001, concrete was being laid on the still under construction Irish Hunger Memorial - bits of ashes and debris from the World Trade Center just a few blocks away are now embedded in the foundation.

“The artists, contractors, and workers like so many others had to flee for their lives and endured the same pain and trauma that our neighborhood did on that day,” Reynolds said. “Like so many of us, they had to work to overcome those experiences in order to return to their work and accomplish such a magnificent piece of architecture.”

Reynolds said that many of the supplies being used at the Irish Hunger Memorial “were commandeered for rescue and recovery efforts and the memorial was put on pause for a while.”

“This Hunger Memorial represents not only a long history of the American dream of overcoming hardship for a better life, but also a very recent one.”

On Twitter, Reynolds showed just how close the proposed adjacent site would be to the Irish Hunger Memorial:

They’re marking the area next to the hunger memorial to plant massive trees, put in a massive set of flag poles, and put in an unsustainable flame. Blocking the views from the memorial & encroaching on its space. Cuomo can’t help himself with rushing this project. #PauseTheSaws pic.twitter.com/Dc0YtPWp1n

Fergal Walsh, a business executive in New York City and a native of Ireland, also spoke on the call.

“You should really be considering the importance of the Irish Hunger Memorial to the community, to world hunger, and respect what that’s representing,” Walsh said.

Another Irish woman, Nuala, said that placing the new memorial next to the Irish Hunger Memorial is "not respectful to either of the groups."

Nuala also questioned whether or not the Irish Consulate in New York City or if any members of the Irish community were briefed on the proposal. A member of MCB1 said that while the two potential sites were only announced the day before the call, the Consulate was informed in writing.

At about 11:30 pm, more than five hours after the meeting began, the MCB1 finalized their resolution draft that said in part that the Battery Park City Community is "overburdened" with memorials, including the Irish Hunger Memorial, and calls upon Governor Cuomo to consider other locations.