“Let’s be under no illusion here,” she said, “when somebody becomes homeless it doesn’t happen overnight, it takes years of bad behavior probably, or behavior that isn’t the behavior of you and me." 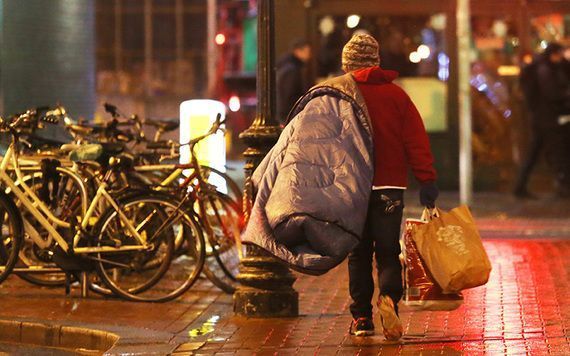 The head of Dublin City’s homeless body has told the public not to feed the homeless in a remark that has provoked outrage.

Eileen Gleeson, who serves as director of the Dublin Region Homeless Executive, told a policing committee that feeding the homeless could encourage their “chaotic lifestyle” and encourage them into long-term homelessness.

“Let’s be under no illusion here,” she said, “when somebody becomes homeless it doesn’t happen overnight, it takes years of bad behavior probably, or behavior that isn’t the behavior of you and me.

“They’re afraid to come in, they’re reluctant, they’re quite happy to continue with the chaotic lifestyle they have. If somebody provides them with some sort of halfway shelter they’ll willingly take it.

“If they’re only getting a cup of soup and they’re homeless it isn’t helpful,” she added.

Clarifying her remarks later, she said, “If we’re to solve the homelessness crisis, we must do it in a structured way. People continuing to help them with soup and sandwiches, while it’s well-intentioned, it isn’t going to solve the problem and it would be much more beneficial if volunteers would link into the existing services.”

Her remarks, however, were roundly criticized by homeless groups and Father Peter McVerry - Ireland’s most well-known campaigner on the issue - also took aim at Taoiseach (Prime Minister) Leo Varadkar.

Her remarks were, he continued, “an insult to many homeless people”.

“It started with the Taoiseach when he said we had a low level of homelessness compared to other countries. He’s actually quoting an OECD report from 2015 which is now out of date and which explicitly states in the report that you cannot use the report to compare homelessness between countries because countries use different definitions of homelessness.”

Varadkar told journalists last week at his party conference, "Ireland has one of the lowest homelessness in the country by international standards compared with our peers, they're the stats, we can provide them for you.

"That is a good thing in Ireland, that we have a low level of homelessness compared to our peers' countries. But what's better than that is we don't think that's good enough, and we want to continue to reduce homelessness in the years ahead."

Context matters. Was asked a question yesterday about Ireland having one of the highest homelessness levels. We don’t by international comparison. That's a fact. It is nonetheless a stain on our society and we’ll do all we can to eliminate it.

The homeless charity, Simon Communities, quickly rebuked Varadkar, tweeting that his claims were “not true” as "other countries use a broader definition of homelessness when gathering their statistics".

As Ireland continues to grapple with a housing crisis that has seen rents prices soar to levels higher than at the peak of the Celtic Tiger, a casual walk down Dublin’s Grafton Street reveal a capital city where rough sleepers are a common sight.

The charity Focus Ireland says the number of homeless families has rocketed from 344 in July 2014 to 1,455 in September this year - an increase of over 400% in three years.

In the same period of time, the total number of homeless has increased from 3,258 people to 8,374 - a record high for Ireland.

Last year Fr McVerry said the crisis was the worst in the state’s independent history.

“We have more homeless people today in Ireland than at any time since the Famine. And the reasons for people becoming homeless are much the same as during the Famine,” he told Newstalk Radio.

“They are being evicted from their private rented accommodation because they can’t afford to pay their rents.

“We have come right back to the 1860s and yet we are the 14th wealthiest country in the world.“Something has seriously, seriously gone wrong. The whole economy is focused on money, money, money and greed, greed, greed and creating wealth. People have been left out and forgotten.”

What do you think of Eileen Gleeson's comments? Share your thoughts below.