Irish fishermen met with Russia's Ambassador in Dublin on Thursday where a "buffer zone" was agreed upon for the Russian Navy's upcoming military exercises off the Irish coast. 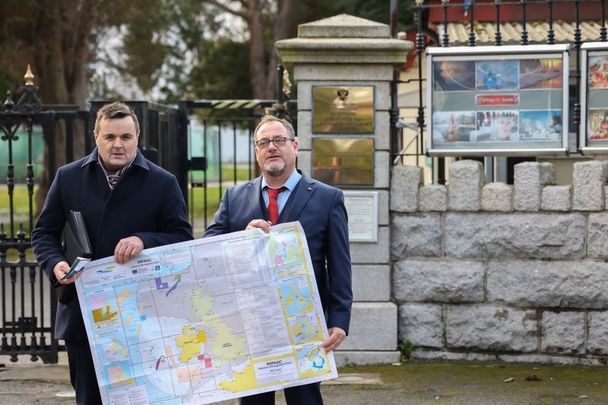 Patrick Murphy and Brendan Byrne, representatives of Ireland’s fishing industries, met with Russia’s Ambassador to Ireland Yury Filatov regarding their concerns about the Russian Navy’s military exercises scheduled to take place off the coast of Ireland from next week.

The story has become a major one on the US networks with the MSNBC top-rated "Rachel Maddow Show" reporting near record level interest when they ran a piece on the standoff The anchor devoted about ten minutes to the story on Thursday evening.

They stated they had received guarantees that there would be no disruption to their fishing schedule caused by the Russian Navy exercise.

However, the Russian embassy quickly shot back that they had given no such guarantees.

After the meeting on Thursday, Nikita Isakin, a spokesperson for the Russian Embassy in Ireland, said in a statement: “The ambassador underscored that the exercises, given their small scale and location, will not adversarially affect the traditional fishing areas.”

The statement also said that "there was no discussion of guarantees of any kind" during Thursday's meeting.

Initially, the Russian Embassy in Ireland described Thursday's meeting as a “constructive and positive” discussion:

On January 27 representatives of the @ISWFPO have visited the Embassy of #Russia in Ireland. During the conversation parties discussed in a constructive and positive way the issues pertaining to the upcoming naval drills of the Russian #Navy off the coast of Ireland. pic.twitter.com/z6Qg2rmIWt

Byrne told reporters after the meeting: “Further information will be shared with us as the exercises draw near and a clear understanding of who is going to be where so that both parties know that there will be a buffer zone between."

He added: “At the same time, there was an absolute guarantee that our traditional fishing grounds will not be impacted by the Russian naval exercises.”

Byrne and Murphy went on to speak with RTE Radio’s Liveline on Thursday, where Byrne described the meeting as “very good and positive."

The Irish representatives say they articulated their concerns about the fish vessels and the fishing industry at the maneuvers of the Russian Navy, but the Ambassador said that he did not want the naval drills to impact negatively on the Irish industry.

Byrne said: “After 50 minutes of discussion, we have agreed today - mutual, co-existence agreement whereby they can do their drills within the overall area that they have available to them and we can continue fishing safely in the traditional grounds that we would do.

“It’s been a good, positive day for the industry. The Russian approach has been very practical, very understanding.”

Murphy said that the Ambassador said that reports about the scale of the Russian Navy’s planned drills have been “greatly exaggerated.”

The embassy said that the ambassador had a “detailed and productive discussion” about the industry’s concerns about the upcoming naval exercises off the Irish coast and “emphasised the necessity to strictly follow safety protocols and regulations pertaining to the matter.”

The Russian Navy’s exercises are set to take place 240km (about 150 miles) off the coast of Co Cork between February 3 and February 8.

The exercises, which will include the use of naval artillery and the launching of rockets, will take place in international waters but within the Irish exclusive economic zone (EEZ).

The Irish Aviation Authority has closed the airspace over the area for the period, while Ireland’s Department of Transport issued a marine notice on Thursday regarding the upcoming "live fire" exercises.

As reports about the planned Russian military exercises emerged in recent days, representatives from Ireland’s fishing industry spoke out, even going so far as to plan a “peaceful protest” in the water.