The Irish South and West Fish Producers Organisation is planning to "peacefully protest" the Russian Navy's military exercise off the coast of Co Cork in February. 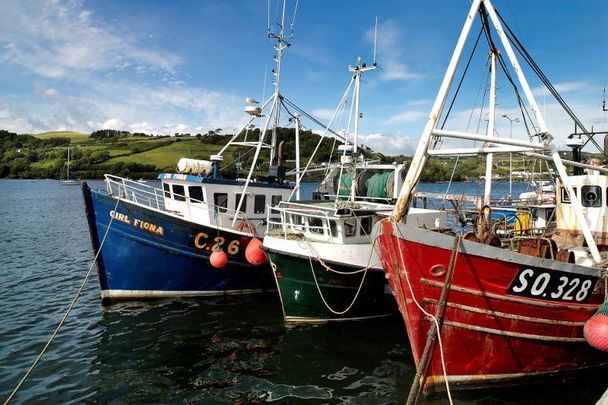 Irish fishermen in the southwest of Ireland are planning to "peacefully protest" the Russian Navy's plans to have live-fire tests off the coast of Co Cork in February.

Patrick Murphy, CEO of the Irish South and West Fish Producers Organisation, told The Skipper on Monday: “It is our understanding that live-fire exercises cannot take place if there are vessels engaged in fishing in the area so we are discussing with our vessels owners and skippers a plan aimed towards concentrating the West Cork and Kerry offshore fishing fleet to undertake a peaceful protest at the military exercise location proposed by the Russians.

“We understand that an aircraft exclusion zone has been announced for the area but we have not received any marine notice that prevents us from fishing this area that is situated inside our sovereign waters.

"Strangely enough, if we managed to force them to relocate further west, it would probably cause disruption to the large Russian fishing fleet that targets Blue Whiting annually during February just outside our 200-mile limit.”

Murphy said the organization regards its members as "guardians and custodians of our waters and support them in their efforts to protect and save this wonderful resource for future Irish generations to come.”

Murphy further told Politico: “Our boats will be going out to that area on the first of February to go fishing." He said that as one boat returns to port, another will go out, maintaining a continuous presence on the water.

“If that is in proximity to where the [military] exercise is going, we are expecting that the Russian naval services abide by the anti-collision regulations," he added.

In recent days, it has emerged that the Russian Navy is planning to conduct military exercises off the Irish coast between 5 am and 3 pm on February 3 and February 8. The exercises will take place 240km off the coast of Co Cork in international waters but within the Irish exclusive economic zone (EEZ).

Simon Coveney, Ireland's Minister for Foreign Affairs and Minister for Defence, told reporters: "Russia, under international law, can take military exercises in international waters, but the fact they are choosing to do it on the west borders of the EU, off the Irish coast, is something that is in our view not welcome and not wanted right now, particularly in the coming weeks."

However, Yury Filatov, Russia's Ambassador to Ireland, said in a press conference on Monday that the situation "has been hugely overblown."

"These exercises are part of the yearly plan of naval activity for 2022," the Ambassador said, adding that "No harm is intended and no problem is expected. All that has been communicated to our colleagues at the Department of Foreign Affairs of Ireland."

Elsewhere on Tuesday, Murphy spoke with RTÉ Radio's Morning Ireland, where he said that he and other fishermen are "planning to try and protect the biodiversity and marine life, all marine life, in that area."

Murphy said the area is “very important” for the local fishermen and that there are "fierce risks" in this.

“This is serious,” he said, adding, “This isn’t about €100 per person, this is the livelihoods of fishermen and fishing families all around the coastline here.”

He posited: “Can you imagine if the Russians were trying to go on the mainland of Ireland to go launching rockets? How far would they get with that?

“It’s no different to fishermen. This is our ground, this is our farm, this is where we earn our living. Why should somebody be able to come in and do that in our waters?”

He continued: “We should be entitled to go fishing there and if we’re fishing there, then these boats and these vessels, warships, shouldn’t be having war games.

“And not only that, these warships will be followed by submarines, and we have our gear out behind our boats. What if they get tangled in it? This has happened before, boats have been sunk by these vessels.

“This is a real concern to us and we in our industry feel that nothing’s being done here like everything else and we want to act and this is how we’re going to act by working.”

“But we are definitely making a point here and we want our government to do something for us. Getting rid of us is not the cure.”