DUP leader Arlene Foster survives for now after defending herself in a near-empty Stormont chamber. 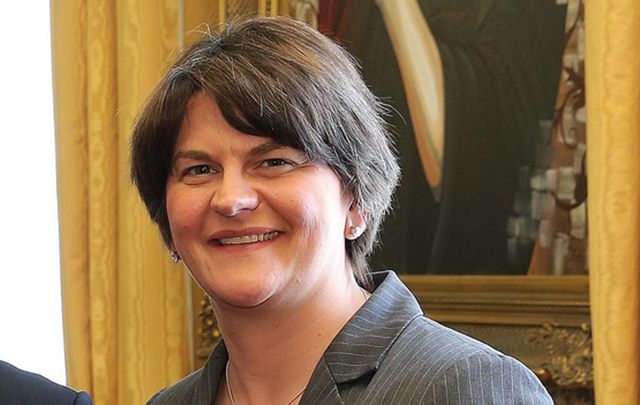 It has been a day of high drama at Stormont with walk-outs and a no-confidence vote against First Minister Arlene Foster.

The Democratic Unionist Party leader is at the center of a row over a botched heating scheme that could potentially cost the taxpayer $496 million [£400 million].

Foster introduced the Renewable Heat Initiative when she was Enterprise Minister in 2012.

However, she is now facing accusations that she didn’t act on information from a whistleblower regarding serious flaws in the scheme.

She is also facing questions regarding the setting up of the scheme, which, unlike its counterpart in Britain, did not have cost control measures and a tiered system built in.

Last Thursday, in a sensational series of interviews on BBC Northern Ireland, Foster and the man who replaced her at the Department of Enterprise, Jonathan Bell, both gave different accounts regarding the months leading up to the closing of the scheme when there was a spike in applicants looking to join.

For breaking party ranks, Bell has now been suspended by the DUP.

Earlier today, Foster spoke to a near-empty Stormont chamber, with only DUP members present, after the other parties walked out.

Speaking outside the chamber, Martin McGuinness said: “The statement which Arlene Foster is scheduled to make today does not have my authority or approval as Deputy First Minister. She is speaking in a personal capacity, and not in her role as First Minister.”

Stormont speaker Robin Newton (DUP) permitted Foster to proceed with her statement, leading to the dramatic walk-out and allegations that he had compromised the joint office which is central to the power-sharing structures.

Later in the chamber, MLAs (Members of the Legislative Assembly, Northern Ireland’s elected representatives) gathered to debate a no-confidence motion in the First Minister.

The Social Democratic and Labour Party (SDLP), Ulster Unionists, the Alliance Party (a more liberal and non-sectarian party), and some of the smaller parties and Independents backed the motion, while Sinn Féin reiterated its earlier call for the First Minister to step aside and let an independent judge-led inquiry to take place.

“They can’t gang up and kick out the elected leader of unionism,” Foster told the Assembly.

“I am here and I will be staying here. I have acted with the highest level of integrity.”

In the end, 39 MLAs voted to exclude Foster as First Minister whilst 36 voted against the motion.

However, under the Assembly’s cross-community rules, she survived with the DUP using the much-maligned “Petition of Concern.”

Foster and the DUP’s problems do not end here, with public anger growing at the size of the tab they’re been left to pick up from the flawed scheme, and with the party and its leader now in a very much weakened position.

As the sun came down on a dramatic day in Belfast, Deputy First Minister McGuinness announced that Sinn Féin will be putting forward a motion in January calling on Foster to step aside and calling on other parties to support the motion.

The RHI mess is an issue that just won’t go away.