Notorious Irish killer Malcolm MacArthur mingled with Irish politicians and the legal elite as he asked former Minister for Justice Alan Shatter to sign a copy of his new book. 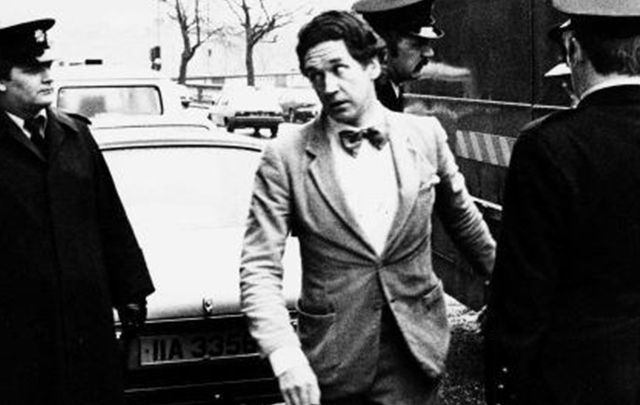 It was one of those stories you never forget.

One of those stories that had you thinking that if I had become a teacher, or had worked in a bank, I would not be going around thinking that the world was off its rocker.

Or that the world was “GUBU.”

For the uninitiated, the acronym stands for “grotesque, unbelievable, bizarre and unprecedented.”

The linking of these four words was first performed by Charles Haughey in the Irish summer of 1982.

He wasn’t referring to the weather.

Haughey, rather, was describing the circumstances surrounding one of the most astonishing and horrifying murder cases in the history of the Irish state.

A double murder as it would turn out, and an arrest in the most unlikely of places.

Ireland is being reminded of that far off summer this week in the context of a newly published memoir by former Justice Minister Alan Shatter.

It’s not Shatter’s book, “Life is a Funny Business” that has people startled, and some former members of the Garda Siochana fuming.

But rather the attendance at a signing of Shatter’s tome by Malcolm MacArthur, one of the most notorious criminals ever to trod on Irish soil.

MacArthur being in the bookstore was not a funny business to others in attendance. Anything but.

MacArthur has been a free man for five years.

Many think he should still be locked up.

I wouldn’t shed a tear if he was because I had cause to interview the parents of one of his victims, a young nurse named Bridie Gargan.

I was a reporter for the Irish Press Group of newspapers that long ago summer.

It might have been officially the “silly season” in the news business, but it was about to take a very serious turn.

The serious turn had already been set in motion because two people had been brutally murdered.

That was the grotesque part of the tale.

The unbelievable, bizarre and unprecedented part of it was to present itself on an evening that might have been quiet but, as the gods of news decided, wouldn’t be.

I was in the Press newsroom in Burgh Quay overlooking the River Liffey.

Another evening shift, the usual stuff. Nothing I would be able to recall years later.

Then the phones began jumping and the chatter on the various newsroom desks began to reach the kind of levels that signaled a big breaking story.

The story concerned the arrest of a man in connection with the murder.

The arrest did not take place in the man’s home, after a car chase, or on a street, but rather in the apartment of the Irish Attorney General, the chief law officer of the state.

The attorney general was Patrick Connolly. He wasn’t at home. He was on holiday in New York.

MacArthur was a friend and had access to Connolly’s apartment.

It was here that Ireland’s most wanted man was cornered.

Haughey summoned Connolly back from New York and the attorney general would duly resign.

The GUBU (the actual acronym is credited to Conor Cruise O’Brien) aspect of the case was taking firm hold in the popular imagination.

On the night of the arrest, I remained in the newsroom picking up extra bits and pieces of a story that was happening in a time long before the likes of Twitter.

That means you had a little time.

I can’t precisely remember if John Banville was at his desk that evening.

The man who would become one of Ireland’s foremost literary figures was Chief Sub (copy editor) at the Irish Press in those days and would typically be working at night.

A few years later, John would pen “The Book of Evidence” a novel based on the MacArthur case.

Suffice it to say it’s a riveting read.

And there would be a lot of riveting reading, listening and viewing in the days after the drama at the attorney general’s place.

And also a tough and very sad assignment.

The horrific crimes of Malcolm MacArthur

MacArthur, from County Meath, would be charged with murdering Nurse Bridie Gargan, also from Meath, while she was sunbathing in the Phoenix Park.

A man who was nearby, a gardener at the American ambassador’s residence named Paddy Byrne, tried to intervene but MacArthur pointed a gun at him and then jumped into Nurse Gargan’s car and drove away.

The gun was fake.

MacArthur must have felt the need for a real one because he drove to County Offaly, ostensibly to answer a newspaper classified ad from a farmer named Donal Dunne who wanted to sell a shotgun.

The somnolence of high summer had been shattered.

The papers couldn’t print themselves fast enough after MacArthur was nabbed.

And of course, there would be all sorts of off lead stories.

I was assigned one of them.

And I was assigned because, as Deputy Chief News Editor, the late Michael Keane, put it: “You won’t just kick in the door brandishing your notebook and demanding the facts.”

Apparently, I was viewed by the newsdesk as being a reporter with a degree of sensitivity in a delicate matter.

Michael was nodding at one of my colleagues as he outlined my assignment.

The reporter he was nodding at was barking into a phone demanding the facts and no BS. He was one of the newsroom’s finest.

But, it seemed, this story required the good cop approach.

That would be me.

And it was also the case with the photographer, Frank Miller, who would accompany me to County Meath to interview Bridie Gargan’s mother and father, Bridget and Vincent Gargan.

Frank and I took Michael Keane’s cue and took the easy-does-it approach as we sat down with the grieving parents in their farm cottage near Ashbourne.

They were very quiet, very dignified, clearly still in shock.

I didn’t even produce my notebook until after ten minutes had passed and the tea had been made.

Bridget and Vincent mostly spoke about their lost daughter.

But Vincent also outlined, in slowly delivered words, how he would mete out justice to the man who had murdered his child.

I would find it necessary to paraphrase him in the resulting story.

A story that lingers in my mind to this day.

One that I will never forget.

Because “GUBU” is something you don’t.