Gerry Adams says Brexit is an opportunity for Irish unity

Britain’s decision to leave the EU creates an opportunity to redesign the constitutional and political future. 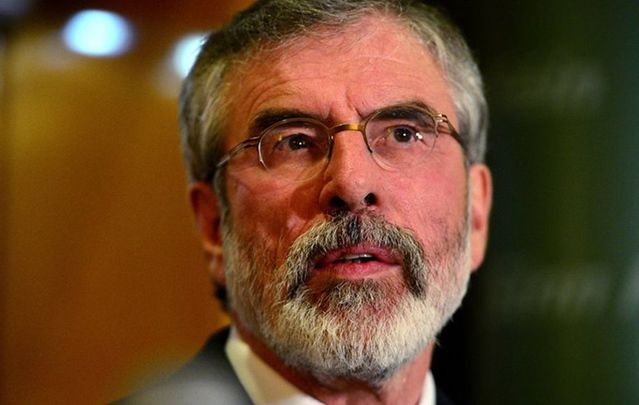 Britain’s decision to vote to leave the European Union has created an opportunity to redesign the constitutional and political future of the island of Ireland, this according to Sinn Féin President Gerry Adams.

The Louth TD has stated that it was hardly surprising that DUP leader and Northern Ireland First Minister Arlene Foster does not want to “explore new relationships on this island” when some politicians in the South are content with the current relationships.

In recent weeks, Foster has rejected calls for an all-Ireland forum to work through the implications that the island faces as a result of the leave vote.

“The Taoiseach needs to show real leadership on the North,” said Adams.

“Notwithstanding Arlene Fosters’ negativity, the appeal of being part of a new, reimagined confident Ireland may well prove very attractive to some unionists in the North.

“But achieving that will require political leaders here rising above their historical tendencies and developing an all island view.

“Arlene Foster’s position in entirely predictable. So too is the position of some Dublin politicians.

“The fact is, the North voted to remain in the EU. Foster lost. Common sense won. So the wishes of the electorate of the North must be respected and upheld.

Adams continued: “Why should unionists move to explore new relationships on this island if some of the main parties in Dublin are content with the old structures and current partitionist arrangements?”

On June 23, the majority of the electorate in the UK voted to leave the EU; however, both Northern Ireland and Scotland voted to remain.

Both Taoiseach Enda Kenny and Fianna Fáil leader Micheál Martin have expressed the view that the Brexit fall-out could eventually lead to a vote on Irish unity.

“All of us need to move beyond the rhetoric and into the reality of unity and the necessary programs and outreach to achieve this very achievable objective,” said Adams.

Part of this could include efforts to agree all-party approaches on the way forward. We should also be open to exploring new ways of governance on this island.

“I welcomed the Taoiseach’s recognition of the possibility and potential for a referendum on reunification to be part of any negotiations with the EU and Britain on Brexit.

“His move to this position, like Fianna Fáil leader Micheál Martin, was conditional and cautious and that is fair enough.

“But all of us now need to go beyond this by actively talking about the constitutional and institutional shape of that new Ireland.

This is not just about six counties joining twenty six counties. This is about uniting the people of this island and creating a new Ireland.

“If the Brexit vote has done anything it has thrown into sharp focus the damaging consequences of partition and the fact that in a changing EU it does not make sense that one part of this small island will be in the EU and the other part outside.”