They can't pass healthcare reform but Irish Republicans and Democrats are on the same page about a Washington D.C. park honoring Irish patriot Robert Emmet. 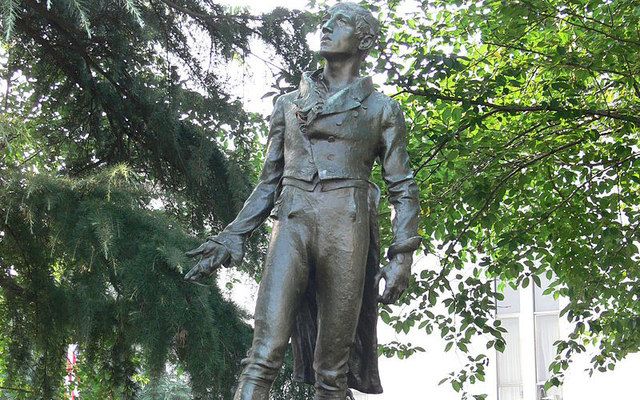 It passed muster in the House of Representatives last year.

It made it to the Senate.

It was hoped that the House and Senate would give their respective approvals in the centenary year of the 1916 Rising.

Then Congress rose for the November election.

So the present Congress, the 115th, is being asked to name federal park land run by the National Park Service in Washington, D.C. after famed Irish patriot, Robert Emmet, he of the immortal speech from the dock.

Legislation to this effect has been introduced, again, by Congressman Joe Crowley, Chair of the Democratic Caucus.

The bipartisan support would seem to suggest that the legislation has a better chance of success than, say, health care reform.

Indeed, the legislation being a backburner matter might actually aid its progress in this time of stark political divisions on Capitol Hill.

Emmet, said a release from Crowley’s office, was an early leader in the cause for Irish independence who drew inspiration from the American Revolution and whose death galvanized generations of Irish-American independence activists. This legislation passed the House of Representatives last Congress after receiving broad bipartisan support.

“For many Americans, the admiration for Emmet reflects a deep and abiding pride in Irish-American history, as well as the worldwide influence of our own American history. I’m proud that we are one step closer to recognizing Emmet’s historic role by naming a park in his honor.”

A Robert Emmet sculpture was donated to the Smithsonian Institute by Irish Americans in 1917 to commemorate the Irish struggle for freedom.

In 1966 it was moved to its present location on National Park Service land in Northwest Washington, D.C. near the Irish embassy in a ceremony attended by the Speaker of the U.S. House of Representatives and cabinet officials.

The park, officially dubbed “Reservation 42” by the National Parks Service, was recently refurbished and there was a reopening ceremony last year attended by Rep. Crowley and Irish ambassador to the U.S., Anne Anderson.

It’s a small triangular piece of property that, once the renaming bill is approved in the house and Senate, will be officially known as “Robert Emmet Park.”

President Woodrow Wilson, not a great fan of the militant version of the Irish independence struggle, spoke at the dedication ceremony, which was attended by many dignitaries.

The rededication event back in the spring of last year, the second such, saw the current Irish Ambassador to the United States, Anne Anderson, presiding over a ceremony at the park site, which is at Massachusetts Avenue and 24th Street.

Ambassador Anderson said in part at that gathering: “Patrick Pearse, in particular, venerated Robert Emmet and gave expression to his admiration in stirring speeches he made in New York and Brooklyn during his U.S. visit in 1914.

“The parallels between the two men are striking: both understood heroic failure; both faced execution with stoicism and dignity; in both cases, their voices resonated more powerfully from the grave than they did in life.

“This statue we rededicate today is uniquely important. Although over a hundred years had passed since his death, this was the first statue of Robert Emmet created anywhere.

“And the history of the statue speaks powerfully to the Irish–American connection: commissioned by the Smithsonian, cast by Irish sculptor Jerome Connor, funded by a group of Irish Americans, and unveiled in the U.S. National Museum in the presence of President Woodrow Wilson.”

A separate statement from the Irish Embassy read in part: “The project encompasses re-landscaping the entire site and installing a wayside information marker. The National Park Service is working in partnership with the Smithsonian Institution, the Irish American Unity Conference and the Ancient Order of Hibernians, all of which have contributed resources to the project.”

Congressman Crowley, who also spoke at the gathering last year, has a strong personal interest in Robert Emmet.

A portrait of Emmet given to him by his father hangs in a prominent place in his office on Capitol Hill.

The bill renaming “Reservation 302” is before the House Natural Resources Committee which at least is not charged with addressing health care or tax reform.

So a positive result is expected at some point.