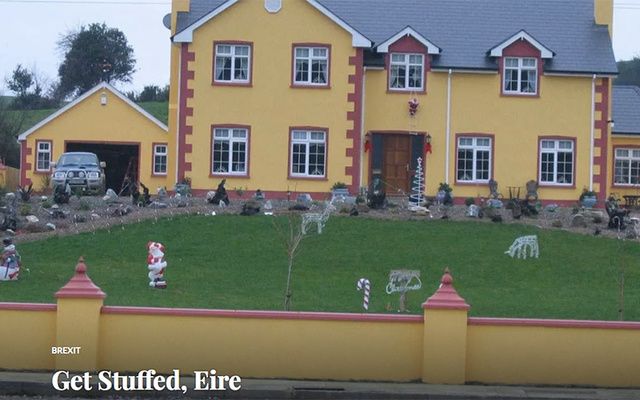 A screencapture of the original "Ireland, Get Stuffed" article. Country Squire Magazine

The journalist behind a bizarre column that branded Ireland a “land of puppy farms, dingy bars, drug mule celebs, verbal diarrhoea and squeaky fiddles” has apologized and resigned from the publication in which his story appeared.

The British online Country Squire Magazine published the article, “Get stuffed, Eire,” focusing on the “devastating effects” that are coming down the line for Ireland when Britain leaves the EU.

The story wrongly claiming that fifty percent of Ireland’s exports go to Britain. The actual figure is 12.7%.

The article, by Jim Browne, has been criticized and branded racist, while others on social media have poked fun at the racial stereotypes that are consistent throughout.

Mr. Browne describes Ireland as “a ‘country’ where the burglars from Britain with surnames like Kettle and Rafferty – return to build eyesore ‘palaces’ in ratholes like Rathkeale (a small Irish town swollen by the proceeds of crime).

“Eire is bankrupt yet replete with EU white elephants (many unfinished as the money dried up to complete motorways and other infrastructure) – the destination for lots of British money via the EU unelected overlords in recent decades.

“The country’s banking history is a joke - wasted away on a property boom and buying in furniture restoring old British castles for narcissistic Irish ‘entrepreneurs.’”

He added: “Eire’s history is basically British – before that it was a bunch of warring families and a corrupt church involved in an incessant spiral of gobshiteing and slaying – certainly not a nation.”

After the article was published, Mr. Browne was on the receiving end of a backlash on social media.

“Pining over a lost empire that’s not coming back eh Jim,” read one post, while another said: “My 6th cousin, Timothy O’Kettle from West Clare is a professional thief. This article does not reflect well on his profession. Pls remove."

There are reports that the magazine has lost advertising revenue since the article appeared and it has since been removed from the magazine’s website “based on a request from the author and the editorial team.”

In a statement, Mr. Browne said: “I would like to state publically that I have nothing against the Irish people, some of whom are my friends and family.

“My daughter is married to a fellow from Galway and I can report I worked with an Irish business colleague for decades without any major turbulences, even during the Six Nations (rugby tournament).

“My article was targeted wholly at the Irish Government and clearly, for many, my volleys lacked accuracy.”

However, he added: “I still cannot see anything racist in my writing. However, the fact that there are people who can so easily call me a racist shocks me into a state of sad reflection.

“When the Irish Ambassador passed comment on it, I was truly stunned. Please forgive me. I bear no ill will to you or your country. Nor to those of us who, like me, are of mixed Irish descent (Browne is an Irish name) who live full-time over here in England.”