Married to an Australian for the past three years, Aideen Cadwell is now faced with the prospect of leaving her husband behind as she is deported back to Ireland. 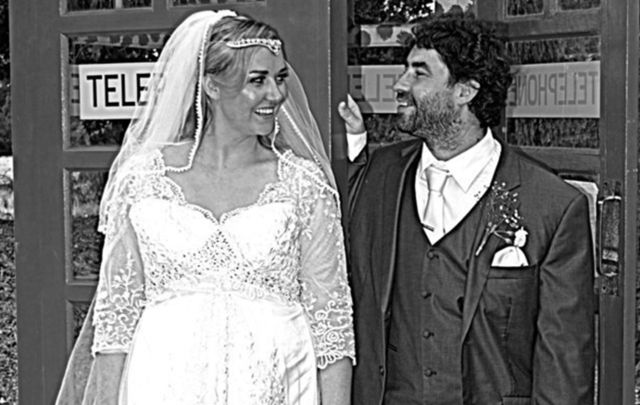 Aideen Cadwell and her husband Luke Cadwell on their wedding day. The couple may now be separated by Australian immigration authorities.

Australian immigration is threatening to split up an Irish-Australian couple, deporting Aideen Cadwell while her Australian husband remains with his daughter.

It’s a petition circling the globe.

From Ireland to the United States to Australia.

And the hope behind is that an Irish woman in Australia can stay there with her Australian husband.

However, if things proceed as Australian immigration authorities apparently plan it, Aideen Cadwell, originally from County Meath, will be forced to part from her husband and their daughter, her husband’s child from a previous relationship.

Aideen and Luke Cadwell have been together for six years, married for three.

Aideen first arrived in Australia in 2011 on a holiday visa.

From there she went on to New Zealand before returning to Australia with the intention of studying for a doctorate.

She fell in love with the country - and her future husband.

Her immigration status, however, was never on as firm ground as she and her husband believed.

How Aideen Cadwell fell out of status in Australia

Once married she set about making things right and this entailed a lot of back and forth with Australia’s Department of Immigration.

Australia’s immigration laws tend to wax and wane. In the past couple of years, they have been considerably stiffened, but in ways that are not always clear to people.

Aideen had temporary resident status combined with a partner visa.

She and her husband believed this was sufficient.

The Australian immigration authorities communicate by way of email.

And it was two emails that Aideen failed to respond to that has put her in jeopardy.

Her failure to respond was because she never saw the emails. They had been sent to an old email address which had been so besieged by junk emails that she had set up a new address.

She was ultimately notified of her failure to respond - by text.

She did not receive any notification by regular mail, which seems somewhat extraordinary in a time of hacking, bogus phone calls, and fake emails.

Cadwell may now have to return to Ireland without her husband

Aideen, a primary school teacher, now has a stamp on her passport which states, bluntly, that she is a “banned” person.

She has, however, been granted permission to continue working while a final decision is made in her case.

But her status as “banned” might as well have her as a convict from the bad old days when Australia was best known to the world as a penal colony.

Ironically, Aideen has a master’s degree in culture and colonization.

“I studied Australia,” she said by phone from her home in Manurah, about 45 minutes from Perth in Western Australia.

Aideen and her husband Luke have submitted a response to an Administrative Appeals Tribunal which can decide her fate.

Their response is not a legal appeal per se, but merely a means of commenting on their situation.

“My lovely wife of over three years, partner of nearly six, will be deported shortly because she missed two emails from the Department of Immigration. I cannot go with her as my eight-year-old daughter lives here with her mother,” said Aideen’s husband, Luke.

“My wife has worked as a primary school teacher for four years. She has integrated into Australian society. She has organized and taken part in charity events. Many parents in her class have written in support of her,” he said.

“If she is deported, we lose everything we have built over the past six years. House, car, career and most importantly, each other. My daughter will miss her fiercely.”

A petition is attempting to reverse the decision

Mr. Cadwell said that a new application for full legal status could take anywhere up to two years to process.

“In that time we will be apart. Ireland isn't just a drive down the road. I love my wife dearly and am desperate for help,” he said.

That help is coming by means of a petition on change.org.

Aideen’s sister-in-law, Siobhan, who lives in Carmel, New York, has been working to generate interest in the petition in the United States.

“Aideen has not been told what she has to do next, but if she’s told that she has to leave she will have only forty hours at the most. So time is very short,” Siobhan, who is from Sligo, said.

The petition for Aideen can be found here.