Alabama Rot causes a dog's flesh to rot and can lead to a deadly fever. 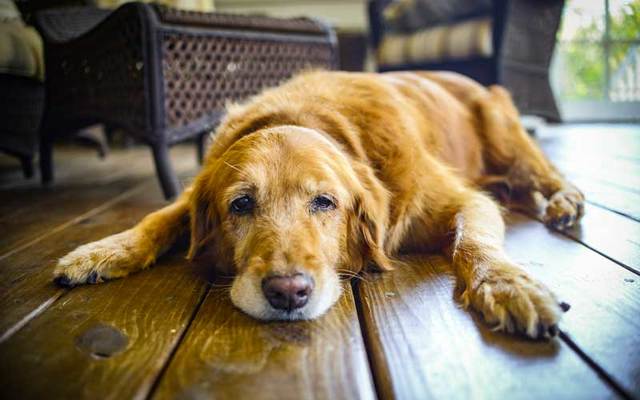 A sick dog rests on the floor. iStock

A second case of a devastating dog disease has been confirmed in Ireland and pet owners are being warned to watch out for the deadly sickness.

The illness, called Alabama Rot (Cutaneous and renal glomerular vasculopathy or CRGV), causes a dog’s flesh to rot and can ultimately lead to kidney failure, vomiting, and loss of appetite. Dogs may also appear tired and “depressed.” One of the most noticeable signs of the disease at its onset are skin lesions, or slow-healing ulcers.

Failure to treat the dog at the first sign of symptoms can lead to a deadly fever.

All breeds are susceptible to the disease and unfortunately there is not way to prevent your dog from becoming infected, The Irish Mirror reports.

It is believed the disease is contracted on the paws and legs during muddy walks, so owners are being urged to wash off woodland mud immediately and to check for signs of CRGV. If in doubt, call your vet.

Alabama Rot first appeared in the 1980s in the U.S., where it affected greyhounds. It has since been confirmed in two cases in Ireland. The first dog was affected in Co. Wexford in January 2015, and now a second dog was recently diagnosed in Dublin.

In his blog petethevet.com, Pete Wedderburn, a Wicklow-based vet, says: "It is thought that the disease may be caused by a toxin from E. Coli bacteria, found in rotting woodland vegetation or in woodland water courses and ponds."

Wedderburn writes: "This low incidence of disease means that the risk to other dogs in Ireland is infinitesimally small but as with any new disease, however rare, it can be helpful for people to learn the facts about it."

"The owners live in Ranelagh and the dog was walked in the Massey Woods in the days prior to presentation.

"The case was managed at the University College Dublin Veterinary Hospital in early February 2017, but the final post mortem result was not received until late March.

"There is no treatment which has been demonstrated to be effective in these cases, and management consists of supportive care and aggressive management of acute kidney injury. Despite the best possible treatment, many dogs do not survive."

The illness has been seen in at least 27 counties in England and Wales since 2012.