Dr. Martin Tobin, an Irish pulmonologist, has told a Minneapolis Court that George Floyd died due to low levels of oxygen. 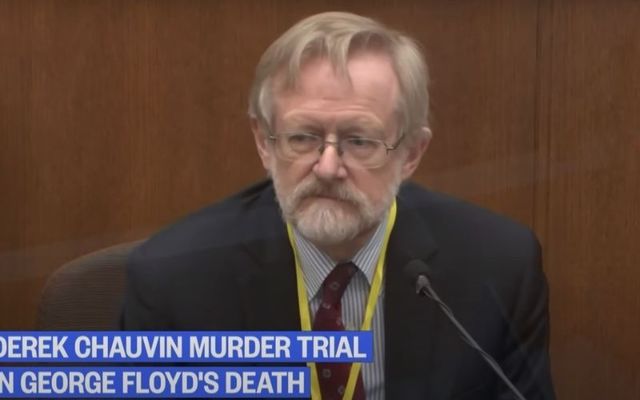 Dr. Martin Tobin, an Irish pulmonologist based in Maywood, Illinois, said that George Floyd died due to a lack of oxygen resulting from his prone position and pressure from Derek Chauvin's knee on his back and neck.

Dr. Martin Tobin addressed the murder trial of Derek Chauvin at the Hennepin County Government Center, in Minneapolis, and told the court that Floyd died due to low levels of oxygen causing brain damage and heart arrhythmia.

Dr. Tobin, originally from County Kilkenny, was the first witness that prosecutors called to the stand in the Derek Chauvin trial on Thursday and he said that Floyd's low levels of oxygen were caused by shallow breathing as a result of a combination of his prone position, being placed in handcuffs, and Derek Chauvin's knee on the back of his neck.

Floyd's shallow breaths meant that he was unable to carry oxygen to all parts of the body, according to Dr. Tobin, resulting in "damage to his brain" and "a P.E.A. arrhythmia because his heart stopped".

"He was being squashed between the two sides," Dr. Tobin said, referring to pressure from officers on top of him and the concrete pavement below him.

"It was almost to the effect that a surgeon had gone in and removed a lung."

Dr. Tobin, who received his medical degree at University College Dublin, was speaking on the ninth day of the Derek Chauvin murder trial.

Prosecutors contend that Floyd died because Chauvin put his knee on his neck for several minutes during an arrest on May 25, 2020, and they have turned to an expert in pulmonology and respiration in an attempt to prove that theory.

The trial has featured testimony from more than 30 witnesses in nine days, including Minneapolis police officers, eye-witnesses, and health experts.

Witness testimony is expected to continue for another week while closing arguments could come within the next two weeks.