The six Irish men were stranded on the highest mountain in northern Sweden and some of the group were only wearing t-shirts and shorts. 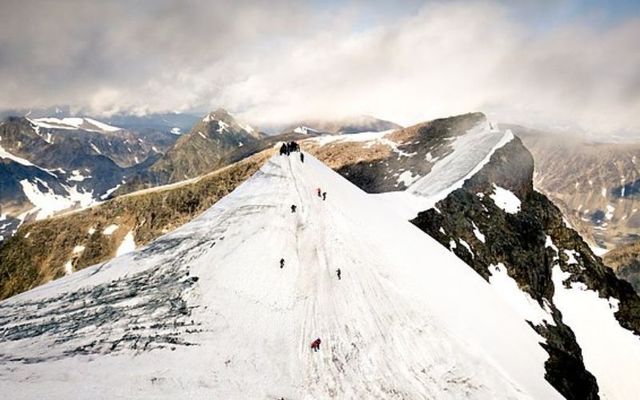 Six Irish people were airlifted off Sweden's highest mountain this morning after being stranded overnight in freezing conditions.

The President of the Swedish Mountain Rescuers Organisation, Rickard Svedjesten, said that all members of the group are thankfully doing well after their ordeal on the mountain known as Kebnekaise.

Speaking to RTÉ News, Mr. Svedjesten explained that the six men were not professional climbers and some were wearing t-shirts and shorts.

Mr. Svedjesten said the crew was unable to send a helicopter up to rescue the group last night because it was too cloudy.

"It started last night at 9.30 pm. The Mountain Rescue got an emergency call.

"It was that there were three climbers lost on the biggest mountain in northern Sweden, Kebnekaise, but that information was wrong.

"They were not climbers. They had no equipment, and their clothing was very bad.

"There was six people and they were aged around 30."

Kebnekaise has a peak of 2,103 metres, more than twice that of Carrauntoohil, Ireland's tallest mountain.

The group of men, who all work in Sweden, were able to stay in a hut on the mountain overnight and Mr. Svedjesten explained they did very well to stay warm overnight.

"There is still snow at the top and there are even glaciers in that area. Last night, the temperature was below zero. It was -10C, yes, really cold," he said.

The group was airlifted to the closest road this morning and from there they were transported to hospital in the city of Kiruna.

They were treated for hypothermia but are said to be doing well.