It appears that Mayo's undying All Ireland fever has made its way to Hollywood! 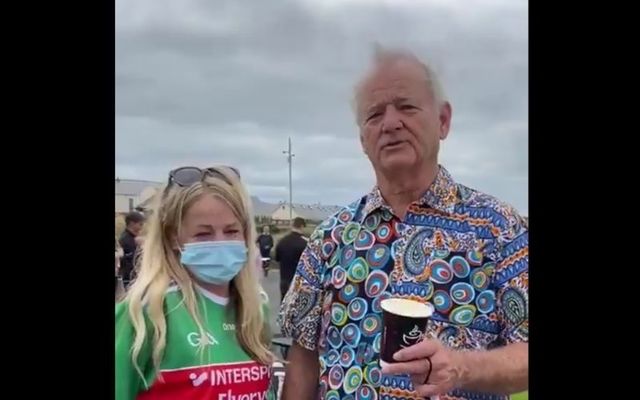 Legendary American actor Bill Murray has been buying raffle tickets in a small Sligo town to win a signed Mayo jersey ahead of the All Ireland final next month.

Murray is currently in Ireland with his family and New York Times best-selling author Tom Coyne to take on some of the country's best-known golf courses for the upcoming golf series "the Links Life".

The tour took Murray, who has traveled to Ireland on numerous occasions, to the small seaside town of Enniscrone in County Sligo, where he revealed that he had entered a draw to win a signed Mayo jersey in aid of Cystic Fibrosis Ireland.

Murray also encouraged people to buy tickets for the raffle in a video posted to Twitter by Jillian McNulty.

"Good luck in the raffle, I'm in for a fiver," Murray said at the end of the 30-second video.

Murray was also pictured posing with an enormous Mayo GAA flag with staff at the Talbot Hotel in Belmullet, County Mayo, on his tour of Ireland.

The Ghostbusters and Groundhog Day star additionally went viral when he serenaded guests at the luxurious Mount Falcon Hotel in Ballina, County Mayo, on Saturday night.

The legendary actor jumped on a stage at an open-air bamboo tent on the grounds of the 100-acre estate with his son, nephew, and brother and gave a stirring rendition of "Ride, Sally Ride".

Saxophonist Lorraine McDonald, who was performing in the tent, described the actor as "the coolest man alive".

"He’s the coolest man alive and I got to sing with him. It was amazing," she told the Irish Independent.

Meanwhile, Murray's son Cooper told the Irish Independent that the family will all be rooting for Mayo in next month's All Ireland final against Kerry or Tyrone.

Cooper said that Mayo's recent win over Dublin was the group's "lucky horse" and said that it "propelled" them forward.

"We heard was the biggest thing here since sliced bread. You can feel it.

"I know we have been rallying behind Mayo’s positive energy."