Irish celebrities including Ali Hewson, Louis Walsh, Jim Corr, and more are calling on the Irish government to end "this trade in canine misery." 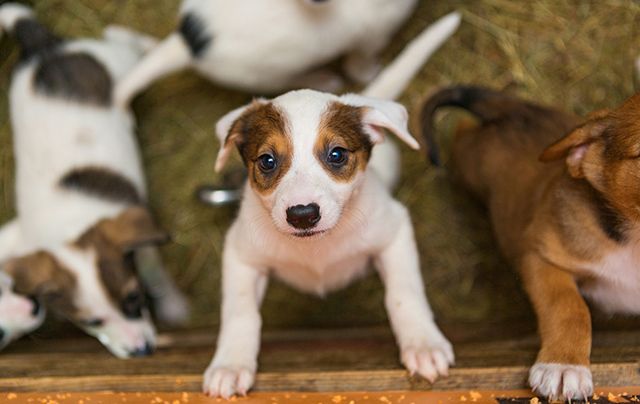 Irish celebrities are taking a stand against the horrific conditions of puppy farms in Ireland. iStock

Irish celebrities and personalities are calling on the Irish government to put an end to puppy farms.

Jamie Dornan, Colin Farrell, Sharon Osborne, Linda Martin, Ali Hewson, Louis Walsh, Rosanna Davison and Jim Corr have all added their names to a statement supporting calls by TDs for an end to “this trade in canine misery,” Evoke.ie reports.

“Every year tens of thousands of pups are bred in cruel and inhumane conditions on industrial scale puppy farms and sold to unsuspecting buyers. Many are exported to the UK.

“Typically, puppy farm dogs are bred like battery farm animals with little or no regard for animal welfare and very often in horrific conditions.

“Many of these mass produced pups which are sold online, in markets and from dealers are already sick, while their mothers are left on the puppy farm, to be bred again and again.

“We also support the call by the ISPCA and other leading animal welfare charities in Ireland and the UK for greater enforcement by Government and local authorities.

“We urge all those thinking of getting a puppy to adopt from animal rescue centers or, if you must buy, then do so responsibly and only buy from an ethical breeder and after extensive research. We can all play our part in the fight against animal cruelty,” the statement added.

Television presenter and singer Linda Martin said she was pleased with the response so far.

“Ireland is known through the world as the puppy farm capital of Europe, a shameful tag that does not appear to concern our local authorities who, as we have seen, have largely failed to enforce the law on animal welfare.

“Tens of thousands of dogs are suffering on licensed puppy farms throughout the country and many thousands more transported to the UK in cruel and inhumane conditions. Meanwhile rescues are stretched to breaking point,” she said.

Martin said she believes international criticism will pressure the government to shut down a ‘shameful’ industry.

“It’s appalling that we have to shame them into doing something” she said.

The celebrities’ stand against the horrific practice coincided with Cavan County Council’s decision this week to grant retention planning permission for a notorious puppy farm which was the subject of a BBC 'Panorama' program that aired last May.

The exposé showed dogs that had just given birth and which were about to give birth confined in illegal wooden crates on Ray Cullivan’s puppy farm at Poles.

The puppy farm passed six inspections by the Cavan County Council despite the ISPCA repeatedly expressing concerns about the conditions.

Two days after the program aired, the wooden crates were withdrawn following a huge public outcry.

Last week, the council granted Cullivan retention planning permission, but this is now being appealed to An Bord Pleanala, Ireland's national planning board.

The objectors, which include 35 celebrities, six Independents For Change TDs and 60 animal rescues from Ireland and the UK, are seeking a public hearing and intend to call international environmental and animal welfare experts to the hearing.

The Facebook group Pups not Profit are running a fundraising drive to help fight against the planning decision made by Cavan County Council.