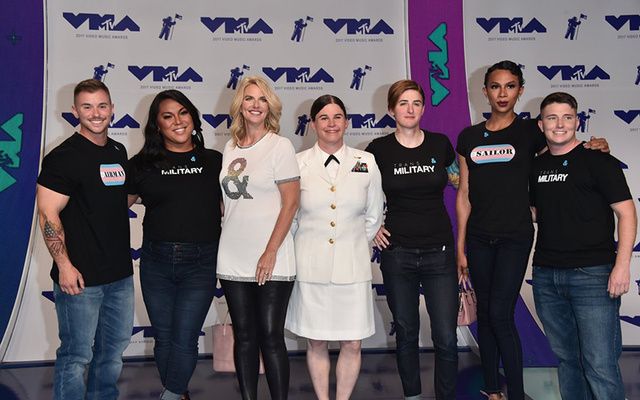 The trans service members on the red carpet at the VMAs. Far left are Logan and Laila Ireland. Twitter / MTV

A trans Irish American US Air Force sergeant was among a number of serving transgender service members who walked down the red carpet at the MTV VMAs.

"Historically, the VMAs have been a huge platform for social issues that are currently happening, so being able to have that platform and share our stories is important to us," Laila Ireland told the entertainment site Billboard.

The group were invited to the ceremony following President Trump’s tweets that trans people would not be allowed to serve in the military. Their attendance took on even more gravity following Trump's action on Friday instructing the Pentagon to implement his proposed ban and direction that they decide the fate of the trans men and women currently serving their country.

Read More: "All I want to do is fight for my country," says Irish American trans serving air man

“Any patriot who is putting their own life at risk to fight for our freedom and stand for equality is a hero at MTV, and to young people everywhere," MTV President Chris McCarthy told journalist.

The Irelands came out together as trans in the Emmy-nominated film, Transgender, at War and in Love, about their lives serving their country.

Laila is currently retired from the Army but won 2017 Military Spouse of the Year on Peterson Air Force Base, Colo.

The news that trans people might be banned enraged the pair after their years of service.

“I would like to see them try to kick me out of my military,” Logan told the Air Force Times. “You are not going to deny me my right to serve my country when I am fully qualified and able and willing to give my life.”

The ban has yet to be implemented but LGBT rights advocates believe it could be a violation of the  the Administrative Procedure Act and will seek to challenge it in court.