Irish man Brendan told RTÉ's Liveline this week that he stocked up on a year's worth of Guinness before minimum unit pricing came into effect on alcohol sold in Ireland. 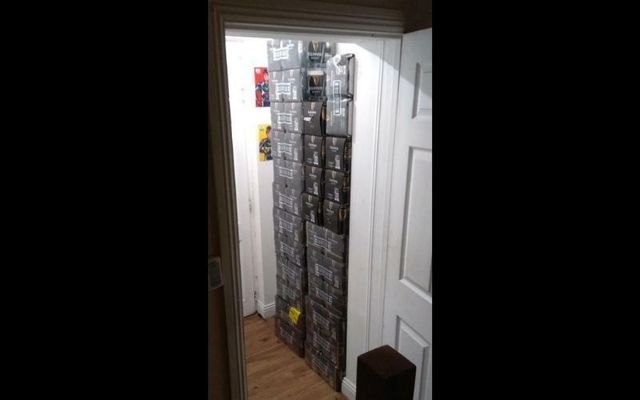 My goodness, my Guinness stockpile!

Irish man Brendan, who stocked up on some 500 cans of Guinness before the Irish government rolled out minimum unit pricing on alcohol on January 4,  told RTÉ Radio this week that he ultimately saved hundreds of Euro.

Brendan saved €700 buying 500 cans of Guinness on the Eve of minimum pricing!! pic.twitter.com/zqO8dD8tGf

Ireland's new minimum unit pricing on alcohol came into effect on January 4, making all alcohol sold in Ireland subject to a minimum price depending on how much alcohol in grams is in it. The new law is part of the Public Health Alcohol Act 2018, which seeks"to address the negative impacts of consumption on public health grounds."

Brendan told Duffy on Monday: "I just found that I'm in receipt of social welfare and it's kind of disproportionately affected me."

He said that the day before the new minimum unit pricing came into effect, one of the smaller retailers near him had a "special offer on Guinness, it was a 12 pack for 10 euro."

Brendan "totally stocked up," and thinks he has "enough to do me for at least a year."

Transporting his treasure was no easy task - a friend had to assist him in making two runs from the shop, where he admitted to getting "a few funny looks."

Looking at the now-viral photo during the live radio program, Duffy roughly counted 12 slabs of Guinness.

“I probably spent around €400-odd," he continued. "I reckon the following day, that same amount would have cost around €1100, so that was a savings of roughly €700 Euro for me.”

"I'm in receipt of social welfare so that's nearly a month's income," he added.

The frugal Irish man noted that he frequently takes advantage of sales to stock up on other goods, including toilet paper.

Brendan added: “It's just discriminating against the lower income, the poorer people. Especially through Covid-19, because I've been very isolated over the last two years and not taking any risks."

Brendan said he hasn't been in a pub or restaurant since the pandemic began, and his "social thing" is now having two people into his house on the weekends for food and beers while watching sports.

"That is going to be seriously curtailed for me with the current prices," he said.