Ireland among countries to issue US travel advisories after mass shootings

The Irish Department of Foreign Affairs mentions mass shootings in the security status listed for the United States. 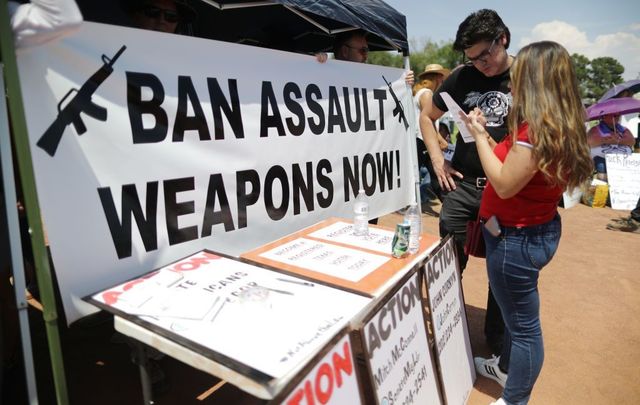 A 'Ban Assault Weapons Now' sign is displayed near a voter registration table at a protest against President Trump's visit, following a mass shooting which left at least 22 people dead, on August 7, 2019, in El Paso, Texas. Mario Tama/Getty Images

The Irish Department of Foreign Affairs mentions mass shootings in the security status listed for the United States.

After two further mass shootings in Dayton, Ohio, and El Paso, Texas, last weekend, the list of countries issuing a travel warning for the United States is growing with even Ireland referencing mass shootings in its travel advisory for the country.

Thirty-four people were killed and at least 64 injured in four tragic shootings taking place within a week in several US states; the most deadly at a Wal-mart in Texas on Saturday morning that appears to have been driven by an anti-immigrant vendetta, the next coming just hours later in a popular entertainment district in Ohio at 1 am Sunday.

"Blood was still splattered on the sidewalk."@BrookeBCNN chokes up while recounting covering Dayton and El Paso shootings at the same time. "That was a first for me, and I'm worried that it might not be the last unless there is real change in Washington" https://t.co/y2PnVvx05v pic.twitter.com/3KKhlE1dvU

There was also further shootings at a beloved Northern Californian festival on July 29 in which three people were killed and a final shooting in another Walmart in Mississipi four days before the tragedy in El Paso, in which a disgruntled employee shot two other employees and an officer.

As a result, countries are flocking to issue travel advisories for their citizens living and working in the US. On Monday, Venezuela and Uruguay were among the first to warn citizens about the risk of mass shootings, quickly followed by a statement fro the Japanese government in Detroit and more warnings from Canada and even Ireland.

Venezuela and Uruguay went so far as to declare there was a high possibility that citizens could be faced with racism and discrimination while Germany warned of a risk of politically-motivated violence.

The Irish Department of Foreign Affairs does not use such strong statements but does now mention mass shooting, referencing no particular incident in particular.

Last updated on Thursday, August 8, 2019, the security status for the United States on the department's website states: "There is an increased threat of terrorism and extremist violence worldwide and this should be borne in mind by Irish citizens living and working in the USA. The USA has also witnessed a number of mass shootings in recent years."

Would you consider not traveling to the US because of the risk of mass shootings? Let us know your thoughts in the comments section, below.