Dublin's Croke Park and Aviva Stadium are reportedly under consideration for Ireland and the UK's joint bid to host Euro 2028. 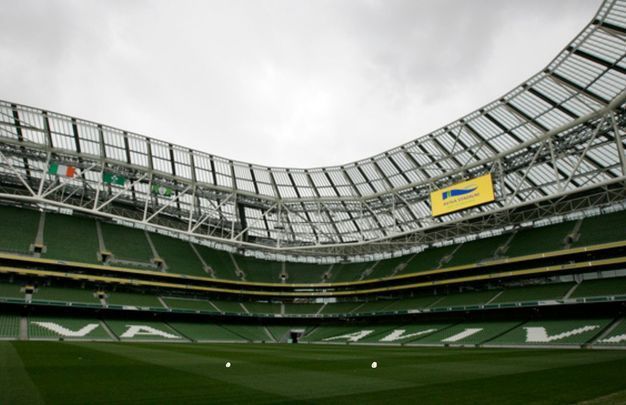 Dublin's Aviva Stadium will be one of two Irish stadiums included in the bid. Rolling News

The five football associations initially commissioned a feasibility study to host the 2030 World Cup but have chosen to target the European Championships due to suggestions that European footballing body UEFA would favor a bid from Spain and Portugal for the World Cup.

Football Association of Ireland Chief Executive Jonathan Hill told RTÉ Sport that both Croke Park and the Aviva Stadium are under consideration for the bid.

Hill confirmed the FAI is currently in negotiations with the GAA over the potential use of Croke Park for the tournament.

"We talk to them anyway on a regular basis and that was part of the initial discussion," Hill said.

He added that the FAI is awaiting a decision from UEFA over the number of teams that will play in the tournament, which will determine how many stadiums are included in the bid. A total of 24 teams competed at Euro 2020 last summer, although there are reports that UEFA may increase this number to 32 by 2028.

The FAI Chief Executive said hosting Euro 2028 would offer a "similar return on investment" to hosting a World Cup, while a European tournament also carries a "far lower delivery cost".

"It would be an honor and a privilege to collectively host UEFA Euro 2028 and to welcome all of Europe. It would also be a wonderful opportunity to demonstrate the true impact of hosting a world-class football tournament by driving positive change and leaving a lasting legacy across our communities," Hill told RTÉ Sport.

"We believe the Republic of Ireland and the UK can offer UEFA and European football something special in 2028 - a compact and unique five-way hosting collaboration that will provide a great experience for the teams and the fans."

The deadline for nations to submit bids for the competition is March 23, while the hosts are expected to be announced in September 2023.

Dublin's Aviva Stadium was due to host four games at Euro 2020, but the matches were relocated to St. Petersburg, Russia for the pan-European tournament due to Ireland's Covid-19 restrictions.