Hundreds of ticketless fans breached Wembley security on Sunday ahead of the Euro 2020 between England and Italy, while public drunkenness, open drug use, violence, and intimidation were rampant inside the stadium. 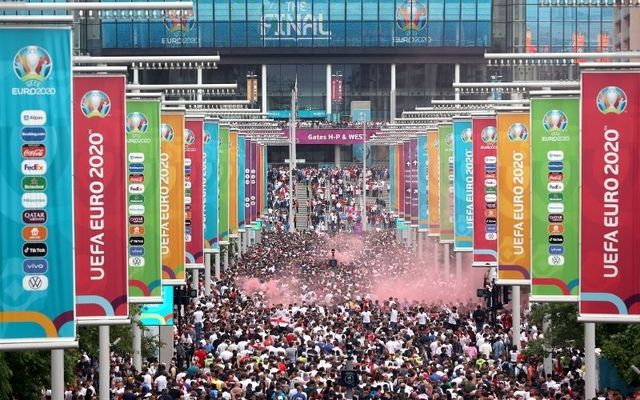 Taoiseach Micheál Martin believes that the violent scenes at Wembley Stadium in London ahead of the Euro 2020 final between England and Italy "doesn't help" a joint bid between Ireland and the UK to host the 2030 World Cup.

Hundreds of ticketless fans breached Wembley security on Sunday, while public drunkenness, open drug use, violence, and intimidation were rampant inside the stadium.

At least 51 people were arrested in connection with the incident, while 19 London police officers suffered injuries.

Several Italian supporters were also attacked in London after Italy's penalty shootout victory over England on Sunday night, while Danish supporters were abused and intimidated during and after their semi-final clash with England last week.

Ireland, England, Scotland, Wales, and Northern Ireland are working on a bid to host the biggest event in world sport in nine years' time, but the Taoiseach said that the bid's chances suffered a setback after footage of crowd disorder emerged ahead of Sunday's final.

"It doesn’t help in terms of bidding for events into the future because crowd control and the organization around that is a key issue," Martin said at a press conference on Thursday.

However, Martin said that it was still "early days" in the bidding process for the 2030 World Cup and that London had staged a flawless sporting event when it hosted the Olympics in 2012.

"Let's be fair all round," Martin said. "The London Olympics was a superb organizing achievement."

The Taoiseach said that the UK had "demonstrated its capacity to host in an excellent way a world-class sporting event" when it hosted the Olympics in 2012.

The UK and Ireland are one of several potential co-hosts bidding for the 2030 World Cup, which will be the centenary of the world-famous event.

Spain and Portugal will table a bid for the event, while Morocco, Algeria, and Tunisia will attempt to take the World Cup to Africa for the first time since 2010.

However, FIFA is said to favor a bid from Argentina, Chile, Paraguay, and Uruguay, owing to the fact that Uruguay hosted the first World Cup in 1930.