Dublin's Aviva Stadium was due to hold four matches at Euro 2020 this summer, which was postponed last year due to the COVID-19 pandemic. The tournament is the pinnacle of European international soccer and would have been one of the most prestigious events ever hosted on Irish soil. 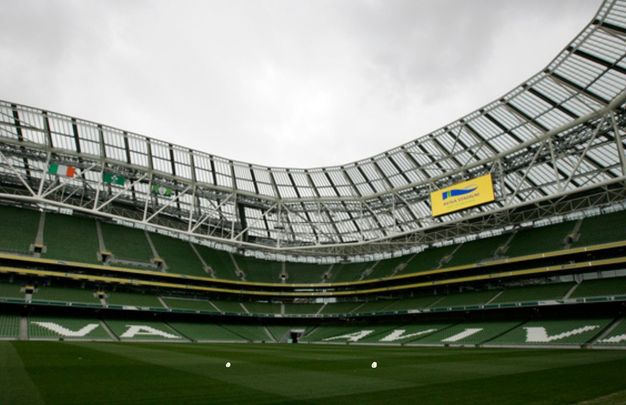 Dublin's four Euro 2020 games have been moved to Russia and London after the Irish Government was unable to guarantee spectators would be able to attend the games.

The Aviva Stadium was due to host four games featuring Sweden, Poland, and Slovakia at the upcoming European soccer championship, which was postponed last year due to the COVID-19 pandemic.

UEFA, European soccer's governing body, confirmed on Friday that Dublin's three group stage matches had been moved to Saint Petersburg in Russia, while its second-round knockout match was moved to Wembley Stadium in London.

This year's European championship is taking place in 12 countries throughout Europe and UEFA has been seeking reassurances from all relative football associations that their stadiums will be at least 25% full in the summer.

Minister of State for Sport Jack Chambers said that the Irish Government was disappointed by the decision but said that it would have been "an extraordinary step up" to host 11,500 spectators at the 50,000-seater stadium in June.

Jonathan Hill, the chief executive of the Football Association of Ireland (FAI), said that the news would be disappointing for all Irish soccer fans.

"This is of course really disappointing news for Irish sport and for everyone who wanted to showcase Ireland to the world this summer," Hill said in response to UEFA's decision.

Dublin was selected as one of the host cities for Euro 2020 in December 2014 and Hill said that excitement had been growing in Ireland ever since. It would have marked the first time that Ireland has ever hosted a European championship game and would have been one of the most prestigious events in Irish sporting history.

The Aviva Stadium hosted the Europa League final in 2011 and the FAI hopes that Ireland will be offered the same event in 2024 as compensation for missing out on hosting Euro 2020 this summer.

UEFA has also distributed €500,000 of Euro 2020's legacy grant funding toward the redevelopment of Dalymount Park, which is known as the "Home of Irish Football". Ireland's omission from the final line-up of host countries has not affected its access to the legacy fund.

The FAI is additionally working on a bid to host the 2030 FIFA World Cup alongside England, Wales, Scotland, and Northern Ireland.