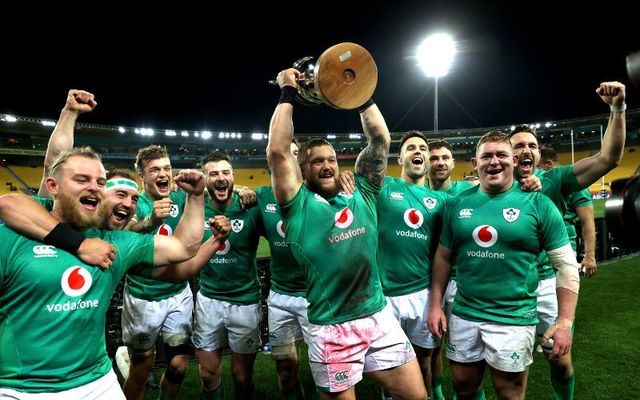 The Irish rugby team has sealed a historic series win against the New Zealand All Blacks, becoming the first visiting nation to win a series in New Zealand since 1994.

Ireland made the perfect start to Saturday's test match in Wellington with first-half tries from Josh Van der Flier, Hugo Keenan, and Robbie Henshaw giving them a 22-3 lead at the break.

New Zealand responded emphatically after the interval and cut the gap to five points through tries from Ardie Savea and Akira Ioane early in the second half.

A Johnny Sexton penalty gave Ireland brief respite while Andrew Porter was in the sin bin, but Ireland were made to pay when a subsequent Sexton penalty crashed agonizingly against the crossbar. New Zealand wing Will Jordan raced over for a try within 60 seconds of that missed penalty, cutting Ireland's lead to just three points.

However, Ireland responded almost immediately with a brilliant Rob Herring try to stem the tide and extend the lead to ten points with 15 minutes remaining.

New Zealand hurled everything at Ireland in a relentless onslaught in the final quarter of an hour, but Ireland stood firm, defending heroically on their own try line.

With time against them, New Zealand tried desperately to make inroads into the dogged Irish defense from deep inside their own half, but Ireland still held firm to secure a historic victory, becoming just the fifth visiting side in history to win a series in New Zealand.