Three flights from the US arrived in Dublin on Sunday, bringing hundreds of American passengers in what has become an increasingly worrying trend. 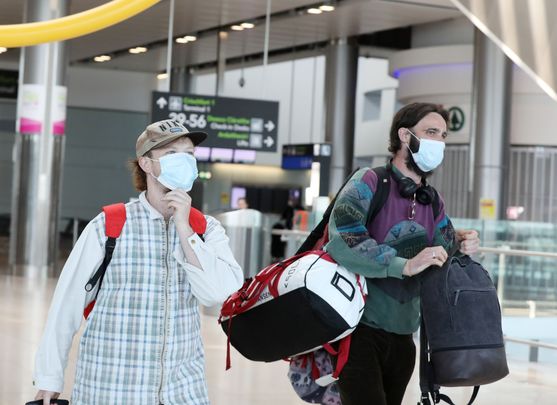 A significant number of Americans have been landing at Dublin Airport. RollingNews

A number of Irish people are reacting angrily as American tourists continue to land in Dublin Airport on their vacation with little regard for Ireland's 14-day self-isolation rule.

Three flights from the US arrived in Dublin on Sunday, bringing hundreds of American passengers in what has become an increasingly worrying trend.

Aer Lingus and American Airlines are the only airlines operating direct flights between Ireland and the United States, offering flights to Dublin Airport from Dallas, Boston, Chicago, and New York.

More than 10 flights landed at Dublin Airport over the past weekend and some visitors have not complied with Ireland's 14-day quarantine rule, as reports a tour guide in County Clare.

Janet Kavanagh, who operates guided cycling tours in Clare, had to cancel on two American tourists who admitted that they hadn't self-isolated for two weeks.

Kavanagh tweeted that she wasn't comfortable following through on the booking because she didn't want to risk the health of her staff and other guests.

Had to cancel guests booked on guided tour today who just arrived from the US and didn’t think 14 days self isolation was ‘mandatory’. I know we are in tourism but I’m just not willing to risk it for staff and other guests. These people are in the country and socialising

A number of people replied to the tweet expressing shock and anger over the incident with many condemning the "selfish" tourists and others blasting Ireland's travel regulations.

The Irish Times, meanwhile, interviewed a number of US passengers in Dublin Airport on Sunday morning and most committed to self-isolating for 14 days.

Stephen Donnelly, Ireland's Minister for Health, said that the expectations regarding the 14-day quarantine were "unambiguous" and that there are "no exceptions."

He said that Irish people had the absolute right to expect that arriving tourists would be subjected to a self-isolation period.

Professor Sam McConkey, Head of the Department of International Health and Tropical Medicine at the Royal College of Surgeons, went a little further than Donnelly and called for jail time for anyone who neglects the 14-day self-isolation period.

McConkey said that Ireland's current regulations are not strong enough, noting that the 14-day self-isolation period was not enough of a deterrent.

"There needs to be regulations with teeth so if people don't follow them then you are more or less looking at three months in Mountjoy [a Dublin prison]."

He said that Ireland continues to open its borders with virtually every country in the world, including some of the most hard-hit by the coronavirus.

More than 3.4 million people in America, for example, have tested positive for the virus, making it the worst-affected country in the world with more than 25% of the total global cases. However, hundreds of American tourists still arrive in Ireland each week, prompting fears of a second wave.

McConkey believes that this influx of American tourists could spread the coronavirus to rural parts of Ireland that have not been affected by the virus previously.

"I think we certainly don't want folks coming in from there to reinfect especially rural parts of Ireland that haven't had COVID-19 very much."