Heatwave for Ireland as above average temperatures continue

Ireland is set to enjoy a heatwave over the June bank holiday weekend. 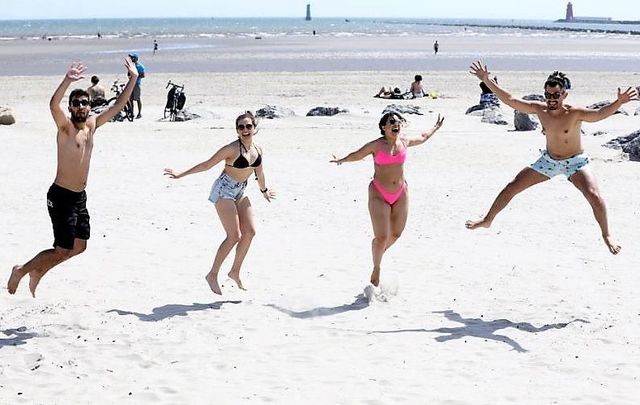 Felipe Chegan from Brazil, Thais Rosa from Brazil, Yasmin Franco from Brazil and Felipe Cardona from Columbia enjoying the good weather and sunshine on Dollymount Strand in Dublin on May 28, 2020. RollingNews.ie

Ireland is set for a scorching June bank holiday weekend heatwave with temperatures expected to soar to 77F over the next four days.

The expected temperatures for Ireland are much higher than the average at this time of the year, which lies between 61 and 64F, according to Met Éireann.

Ireland has been experiencing above-average temperatures since Monday and it appears that the good weather will continue until Tuesday at the very least.

Met Éireann is forecasting highs of 70 to 77F on Friday and expects similar temperatures on Saturday.

However, the meteorological service says that temperatures in the east and southern parts of the country will be slightly cooler due to a moderate southeasterly breeze.

Read more: Leaving Certificate exams cancelled for first time ever due to COVID-19

Temperatures are set to rise again on Bank Holiday Monday with highs of 72F to 77F and Met Éireann is predicting temperatures to begin to drop on Tuesday and expects that they will be in the mid-60s by next weekend.

Earlier in the week, temperatures soared above 80F in County Roscommon at the peak of the fine May weather.

The good weather is hitting Ireland at a time when Irish high school students would have been preparing for their Leaving Certificates - a phenomenon referred to as 'Leaving Cert weather.'

Leaving Cert weather refers to a period of particularly fine weather that typically hits Ireland in the two weeks before its state exams when graduating high school students are confined to studying indoors.

The Leaving Cert was due to kick off on June 3 but has since been cancelled due to the COVID-19 pandemic, perhaps indicating that Leaving Cert weather was merely a coincidence and not an attempt to spite young students desperate for some summer sunshine.