The Save Ireland's Great Hunger Museum group is opposed to the decision to move the collection's ownership from Quinnipiac University to the Gaelic American Club in Fairfield, Connecticut. 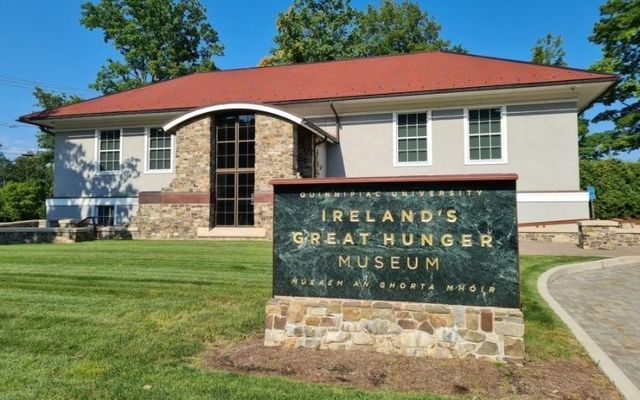 Quinnipiac University has decided to award the contents of Ireland’s Great Hunger Museum to the Gaelic-American Club (GAC) based in Fairfield, Connecticut, multiple sources told the Irish Voice newspaper and IrishCentral.

The decision was made in recent days by Quinnipiac after several meetings with GAC, which boasts 6,000 members.

GAC has plans to showcase the contents of Ireland’s Great Hunger Museum, which Quinnipiac will donate, in a building not far from where the GAC is located.

On Friday morning, Quinnipiac issued a statement confirming its decision.

“Following a unanimous vote of the Quinnipiac Board of Trustees, Quinnipiac University announced today that it will partner with the Gaelic-American Club (GAC) of Fairfield to serve as the new location for Ireland’s Great Hunger Museum collection. The full collection will be displayed in a new space to be created by the GAC,” the statement said in part.

Turlough McConnell, leader of the Save Ireland’s Great Hunger Museum group which had been hoping to keep the museum in its current home in Hamden, just off the Quinnipiac campus, issued a statement on behalf of his group on Friday morning which was critical of the university’s decision to award the museum’s contents to the GAC.

“We are shocked that Quinnipiac would make a rash decision to turn such a valuable collection over to a social club, moreover, one that does not have appropriate charitable status. Even more surprising is that it would do so while the Attorney General's investigation is still ongoing. Our group, Save Ireland's Great Hunger Museum Inc., will await further explanation from the Attorney General's office, whose responsibility is to ensure the welfare of the public trust in this matter,” the statement said.

“Our concern always has been, and always will be, the story of Ireland’s Great Hunger as told through art and artifacts by leading artists, for which the university has shown a callous disregard. The Board and supporters of Save Ireland’s Great Hunger Museum remain committed to doing what is best for the museum and collection, and doing so in a legal, ethical and transparent manner.”

Quinnipiac’s statement went on to say that the university’s goals were to “preserve the collection, to have it displayed intact, and for it to remain in Connecticut in a more central location accessible to a broader public. The decision follows extensive exploratory conversations with many organizations and community leaders as the university investigated multiple avenues to preserve the collection and its important message.”

The statement added, “The partnership with the Gaelic-American Club places the museum in a location at the heart of an already vibrant Irish-American community. The 75-year-old club is one of the largest Irish-American organizations in New England, with 6,000 members and a rich cultural program consisting of many active clubs and committees, and is located only 30 minutes from IGHM’s current location in Hamden. The university remains committed to keeping the collection together and honoring the terms of the original donor agreements for any items donated to IGHM.

“After reviewing multiple proposals, the university’s Board of Trustees voted unanimously to partner with the GAC after the club submitted a sustainable plan based on its established infrastructure and cultural and financial resources to support the display of the full collection, and given the club’s location.”

The statement detailed the GAC plans for a new home for the collection.

“GAC plans to locate the museum within the Fairfield Historic District, alongside other local museums and the downtown shopping district. The museum will be adjacent to the GAC’s headquarters, which includes a restaurant and event space, and within walking distance of the Fairfield MetroNorth train station,” the statement said.

“In light of the university's decision to relocate the collection, the Gaelic-American Club is honored to partner on a solution that keeps the treasured IGHM collection here in Connecticut, safeguarded and shared widely by the Irish American community,” said Amy O’Shea, a representative of the GAC.

GAC Vice President John Foley hopes that all of the groups interested in the museum can unify around Quinnipiac’s decision.

“Now that a clear path forward has been established for the collection, it is time we unify our collective efforts and all rally around the shared goal of ensuring the future visibility and impact of the collection and the story that it tells,” he said in the university’s statement.