Ireland heads to the polls on February 8 for General Election 2020 - here's the political parties that IrishCentral readers are supporting. 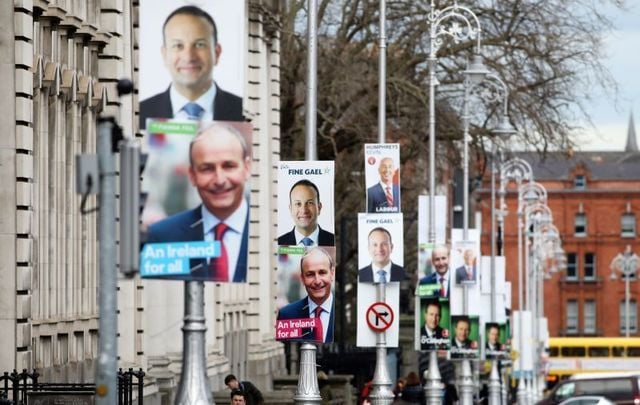 These are IrishCentral readers' favorites for Ireland's General Election 2020. RollingNews.ie

An incredible three-way tie in Irish election sees Fianna Fail, Fine Gael and Sinn Fein all tied at 22 percent according to the exit poll.

The result could mean a lengthy political stalemate as all three parties may seek to lead a coalition government.

If the exit poll is right---survey of 5,000 voters, the odds are strong that another general election may not be too far away to break the stalemate.

The Greens finished on 8 percent and labour on four percent both disappointing results.

How IrishCentral readers would have cast their ballot:

One Irish political party was the clear favorite amongst respondents

Ireland is set to head to the polls on February 8 to vote for their new government after Taoiseach Leo Varadkar requested the dissolution of the 32nd Dail Eireann in January.

Unlike in the US, Ireland has more political parties in the running. With that, IrishCentral wanted to know - who would get your vote in Ireland’s General Election, and why?

With more than 400 responses, there was one clear winner: Sinn Féin.

Behind Sinn Féin was Fine Gael, the current Taoiseach’s political party. Interestingly, in third place was “Other," which heavily featured votes for Aontú and the National Party.

Sinn Féin in the lead isn't necessarily surprising as they have been enjoying a surge in the opinion polls in the lead up to voting.

Below, a selection of the explanations respondents provided:

Their focus is on improving social conditions and on those left behind.  I like the leader being a woman her focus is a little different. FG and FF have almost merged.

It's Sinn Fein's time. Many years ago I would have unequivocally voted for Fianna Fail as it was the republican party. But Fianna Fail's unwillingness to go into a coalition with Sinn Fein (the days of one-party government are over) suggests it is no longer interested in a united Ireland.

FF and FG have ruined the country. I am 33 and still live at home as I cannot afford a house. Majority of people on the dole can work, refuse too, easier to get handed money and houses while we get taxed to the max on the little we earn

Because the country needs a real alternative and real change. We have been governed by FG and FF for close to 100 years and still, the ordinary worker suffers and sees no benefits of the upturn in the economy. I don’t trust FG and FF with the issues facing the country today. FF caused them and FG have exasperated the issues.

I like women leaders. My politics are left-aligned. I do not think that religion should be part of government. The right to freedom of religious practice without infringing rights of others should be protected. I prefer larger parties. A vote for a small party gets lost.

Common sense based. Independent focused. Anti-Colonial and puppet regime occupation displacing a culture and a people within a nation shattered.

Inclusion of a comprehensive mental health manifesto which I believe is overdue and badly needed in Ireland. We need a change, there have been too many mistakes made by FF and FG costing people their lives and homes and neither party deserve to be in control of this country

I want to see a United Ireland in my lifetime.

They are the only party which covers all Ireland

The "only" party to uphold the principles of the 1916 Easter Rising and honour and respect all those who have sacrificed their lives to end partition. The other parties have betrayed those who laid down their lives for Irish freedom.

They've done a good job bringing us back from the brink and building up our country. Brought about positive social change. Handled credit well.

Give them time to finish the work that the have started

Brought the country back from the brink of collapse after Fianna Fail's incompetent management of the financial crisis. Have steadily built back up the country and should be allowed finish the job. Made marvellous strides in social legislation and constitutional change with more on the agenda to complete.

The party's philosophy and principles represent the most logical and progressive movement toward the Reunification and the Future of Ireland.

Keep Ireland Democratic, free of hate, and a beacon of HOPE in Europe

Secured the country economically, most talented front bench politicians. no doubt have made mistakes but have fixed and done so well after Fianna Fail and deserve the chance to solve certain issues.

I will not vote for a specific political party... I will vote for specific candidates, who seem to me to be honest, hard-working and dedicated to the improvement of social and economic conditions for Irish citizens and residents of Ireland, in general.

Fine Gael and Fianna fail are the same party. All corrupt to the core! Will do anything for the EU but nothing for Ireland.

Aontu: They are the only party looking after the ordinary people

Aontu: Prolife & Christian, sick of people looking after own interests & lining own pockets.

National Party: Irelands health care is overrun we have a housing crisis and our current government wishes to bring in (New Irish) citizens

National Party: They support free speech and are capitalist

National Party: Ireland and Irish culture are are great! Why put them at risk with mass immigration?

National Party: Because all the rest are globalist lackeys pandering to political correctness, wokeness, pro mass immigration, anti free speech, pro the rights of tiny minority interest groups over everyone else.  Oh and of course falling over themselves to virtue signal about how much they are doing to avert the fake climate crisis!

National Party: They're really about Ireland, it's People, and prosperity of the country! Ireland is for the Irish!

I see it as the only way to keep FG out. I couldn't vote for Sinn Fein as I don't believe in abortion and they have already make it possible to have abortion in N.Ireland up to 7 months and she will do the same in republic. Voting for the other parties will not make a difference to change the leader of the country

Fianna Fáil and Sinn Fein in government together would be a good match to fight Brexit and plan for a united Ireland.

Because Fine Gael's talks a great game, but doesn't deliver on housing and healthcare not to mention the way that they have asked struggling rural Ireland to cash the checks it has written for virtue-signaling on refugees.

A better Party with policies that can be achieved, Fine Gael have had their chance and NOTHING achieved

Only true Republican Party that has the welfare of its citizen in mind. True representative of the people.

Although Fianna Fail is slightly Conservative, they have seemed to act on the Equality for All and the Unity of the Island. This along with the belief that they are part of the European Unification speaks volumes to me. Fianna Fail seems to be Progressive while still honoring the Old Ways.

Stable and not extremist

Because they have always fought to do the right thing by the environment, even when it was not cool to do so. They have never put their political party and re-election of candidates before doing what was right for our environment and it is only because of the recent "Green Wave" in the local elections that the other two major parties have scrambled to have "Green" policies in this election...the same two parties have systemically blocked and prevented protective environmental legislation by the Green Party from being passed for the past 7 years...absolute opportunistic hypocrites!

I'm totally disgusted with the utter failure of elected politicians and governments to solve the many problems that so adversely affect the quality of life of so many Irish people and families, these politicians have no empathy for the plight of many people, they have no emotional intelligence whatever...they all need to remember that to be a great leader the needs of the citizens must come before personal credit and recognition and the only power worth having...is the power to do good.

Environmental concern such as climate change are critical to the planet's future. This party is more likely to address those problems. Also, universal health care is a critical need for all people.

The long standing FF/FG axis needs to be replaced!!

I want to see great action done for the environment we are at the point, we should no longer be plowing forward we need to slow down, rebuild a sustainable foundation and then pick up the speed again! they are liberal without being extreme in their views and understand the importance of our land! with out a healthy world we can not have a health economy

No other decent choices to vote for. Finna Fail bankrupt the country. Fine Gael love penalising people with taxes. Sinn Fein does not represent the working individual. Labour......enough said. So who else can I vote for ?????

Climate crisis is so urgent, we need a party that prioritizes this and integrates considerations of it into all policy and decision-making.

only party with long term plans beyond the next election cycle

They will stand up for teachers and nurses but aren't as left-wing as Sinn Fein. I do not want tension on the boarder and fear perhaps Sinn Feins history may lead to that.

A need for effective social welfare policy development and enactment

They are for the worker and not rich people.

I think that a left-wing, non-nationalist government is the way to maintain a healthy economy and sustain a healthy relationship with Northern Ireland and the UK as a whole.

Only a Socialist government will have the political will and ability to tackle housing, health and climate change.

The purpose of solidarity is to build our movement, and to embody our mutual care and concern for justice. Solidarity works best when we respect each other's differing needs and life circumstances, understand that there are many ways of being in solidarity, and co-ordinate our responses

Their commitment to socialism

They are the only Party with a serious answer to climate change - they are the only party fighting for and prioritizing the working class ver by ignoring businesses They were the first to call for repeal, but they put the most radical action into fighting for it as well.

We need a party for the people

They are the only party that have been consistent about their principles and promises, Roisin Shortall risked her political career to do the right thing

The seem to be level headed people, who care about the people of Ireland. Id like to see 3 Independents come together and work together. Their ideas are needed in Ireland

Liberal philosophy and health care for all

How do you think Ireland's General Election 2020 will turn out? Let us know in the comments