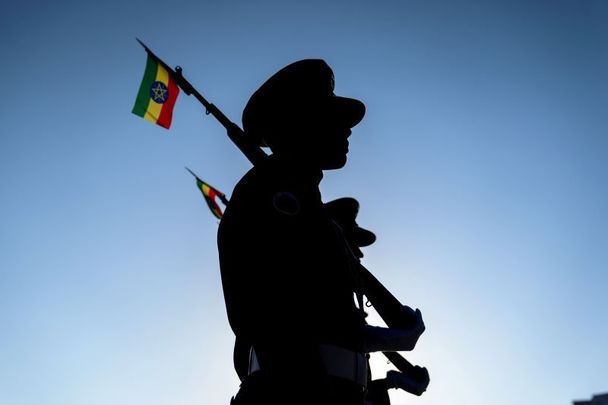 November 7, 2021: Republican March Band of Ethiopia stand on guard as a ceremony is held to support the Ethiopian military troops who are battling against the Tigrays People Liberation Front in Amhara Region in Addis Ababa, Ethiopia. The country's Prime Minister Abiy Ahmed declared a state of emergency on Wednesday as his government's conflict with Tigrayan forces has expanded beyond that group's home region in the north. Tigrayan fighters have recently forged an alliance with the Oromo Liberation Army, a group fighting on behalf of ethnic Oromos, who make up about 35 percent of Ethiopia's 110 million people. Getty Images

Four of Ireland's six diplomats have been expelled from Ethiopia, Ireland's Department of Foreign Affairs confirmed on Wednesday.

In a statement issued today, November 24, Ireland’s Department of Foreign Affairs said: “Earlier this week, the Ethiopian government informed Ireland’s Embassy in Addis Ababa that four of the six Irish diplomats serving at the Embassy must leave the country within one week. Our Ambassador and one other diplomat have been permitted to stay.

“The Ethiopian authorities indicated that the decision to scale-down the size of our Embassy was due to the positions Ireland has articulated internationally, including at the UN Security Council, on the ongoing conflict and humanitarian crisis in Ethiopia.”

Minister for Foreign Affairs, Simon Coveney T.D. commented: “I deeply regret this decision by the government of Ethiopia.

“Ireland has had a diplomatic presence in Ethiopia since 1994, working in partnership with the government and people of Ethiopia to support the development of their country. That Ethiopia has been the largest recipient of Irish Aid funds in the last five years is a demonstration of Ireland’s deep commitment to the country. Our engagement internationally on Ethiopia, including at the Security Council, has been consistent with the positions and statements made by the European Union, including by the EU High Representative/Vice President Josep Borrell.

“Our Embassy in Addis Ababa remains open, with the team continuing to discharge their responsibilities, including in relation to the international organisations to which we are accredited, including the African Union and IGAD. Ireland fully supports the role of the African Union in seeking a peaceful solution to the conflict, including through the work of its Special Envoy, former Nigerian President Olesegun Obasanjo. We are committed to the sovereignty and territorial integrity of Ethiopia.

“In the context of the deteriorating security situation in Ethiopia, the focus of Embassy will be the provision of consular services, although the reduction of our diplomatic staff numbers by two thirds will inevitably affect our ability to fully provide such services. We recommend against all travel to Ethiopia and Irish citizens in Ethiopia should leave the country by commercial means immediately.

“I hope the decision of the government of Ethiopia will be temporary, so that our Embassy staff can return to carrying out their important duties in the country as soon as possible.

“We will maintain our solidarity with the people of Ethiopia as the humanitarian crisis worsens. In the coming weeks, Irish Aid will disburse €16 million to humanitarian partners operating in Ethiopia including UN OCHA, UNICEF, UNFPA and the International Rescue Committee.”

The Ethiopian government has informed Ireland’s Embassy in Addis Ababa that four of the six Irish diplomats serving at the Embassy must leave the country within one week.

Speaking with RTE Radio on Tuesday, Coveney said that "we've been giving Irish citizens quietly for the last month or so that they should leave Ethiopia because that is the prudent thing to do right now." He said there are about 80 Irish citizens in the country right now.

Coveney said that since earlier this year, "Ireland has been shining a spotlight on things that have been happening in Ethiopia that really are breaches of international law and are of serious humanitarian and human rights concern.

"Since then, we really have in many ways, led the political debate within the Security Council on the need for the international community and the UN to intervene and to guarantee humanitarian access to parts of Ethiopia that desperately need it, to expose the human rights abuses that have been happening there, in particular, the use of sexual violence as a tool of conflict, which is essentially mass rape, and also to try and be part of a political solution that involves political dialogue because our strong view, which is shared by the international community, and in particular the United States and the EU, is that the solutions for Ethiopia now are not through a continuing war and military means but through political dialogue."

He later added: "We've already had unfortunately a lot of death and a lot of killing in Ethiopia this year, but it could get an awful lot worse in the next few weeks and that is why, unfortunately, the Ethiopian government has decided to target Ireland in the context of our commentary on this issue. I think that's unfortunate, but not that unexpected.

"But more importantly, Ireland will continue to be a voice internationally, along with the United States and the EU, to try to put pressure on those that matter in Ethiopia to focus on dialogue rather than war."