Ireland's car rental prices have seen a sharp increase from pre-pandemic levels, forcing tourists to reconsider whether or not they can afford to visit this year. 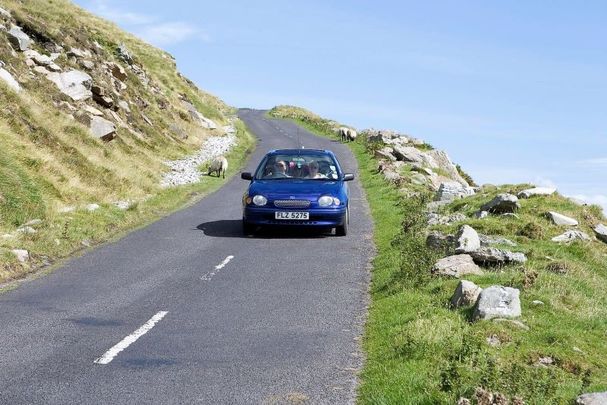 The heightened prices for car rentals in Ireland are forcing tourists to reconsider or cancel their visits to Ireland this year, industry experts have said.

“An analysis shows car rental costs have at least trebled since before the pandemic; in some places they’ve quintupled,” RTÉ Radio’s Drivetime recently reported.

“In Kerry, the average price has increased from around €400 to approximately €1,200 per week to hire a car.”

A spokesperson for Hertz, one of the car rental companies at Dublin Airport, recently told Dublin Live: "The rising costs are mainly due to the Covid-19 pandemic and rising inflation has also seen many car rentals sell-off fleets because of an increase in fuel as well."

The high car rental prices are having a knock-on effect on Ireland’s tourism industry, which is also attempting to recover from the worst of the pandemic.

“We are hearing stories of some people canceling their holidays,” Paul Kelly, CEO of Fáilte Ireland, the country's tourism development authority, told RTÉ on Monday.

“We’ve had feedback from places like the bed-and-breakfast sector and others where they’ve had cancellations because the people coming to visit them weren’t able to get cars.

“And of course, we’ve had issues where people say the prices are very high. This is a global phenomenon.”

While Kelly claims it's a "global phenomenon," a report carried out by Indecon for Fáilte Ireland found that the cost of renting a car for tourists in Ireland is high compared to the European average, RTÉ News reported.

Hopeful renters have taken to social media in hopes of finding a good price, as well as to air their frustrations about the heightened prices.

Among them is New York-based CNN correspondent Donie O’Sullivan, a native of Co Kerry, who was quoted more than €1,950 for a rental for less than a week:

Car shortage = crazy car rental costs in Ireland this summer. This is for less than a week. pic.twitter.com/PL6DJuWTH5

One person replied to O’Sullivan saying that he was quoted  €3k euro for two days:

I was quoted €3k euro for 2 days in a Ford Focus in Dublin next week via Irish Car rentals A work colleague said guest at a wedding last week all left ireland instead of touring (and spending $$$$) because of car rental costs! Govt need to step in

Another replied saying that prices have more than doubled since December and that he'll be "staying put this summer."

Just did a quick search on Expedia for pick up at Dublin airport mid August and returning 4 weeks later. Prices are more than double for what I paid last December for the same amount of time. Think I'll be staying put this Summer! pic.twitter.com/LAAbWvdbkT

In another instance, one person said on Twitter that his US-based brother was quoted €10,000 for three weeks in July from a rental company at Dublin Airport:

Brother (living in US) was quoted 10,000 euro for a rental car for 3 weeks in July from Dublin Airport.

Another person tweeted that they were quoted more than €3,000 for two weeks in July:

One person said it would be cheaper to buy a car instead of renting, which some people have reportedly resorted to doing.

What's happening with car rental prices in Ireland. Over €2000 for economy class for 10 days in June. Be cheaper to buy a car off done deal and leave it at the airport.

However, amidst the frustration, one Dublin-based councillor suggested that tourists should “get the bus."

If tourists want value for money while visiting Ireland, get the bus.

Seriously, car rental prices are so far down on the list of things that Fáilte Ireland should be caring about. https://t.co/YJ9m4Abrfl

The warning signs about the car rental debacle came as early as December 2020 when Paul Redmond, chief executive of the Car Rental Council of Ireland, told the Irish Times that the country’s rental supply had diminished.

"It has gone down so low now that the chances of re-fleeting, if the recovery comes quickly, will be a big problem.

“Companies will not have the financial resources and might not be able to re-fleet without supports,” he said.

More recently, Redmond said in a statement on May 17: "Rental companies were forced to sell off their stock of vehicles during the pandemic.

"Going into 2022, stock levels were about 50% of what they would have been in pre-pandemic years. In rebuilding stock levels, car rental companies face a lack of supply of new cars from manufacturers in the wake of the pandemic.

"Global car production slowed substantially during the pandemic and there is now a huge backlog of orders for new vehicles. The problem is compounded by component supply issues for the production of new cars.

"High demand and supply shortages have resulted in more expensive and fewer new cars available to the Irish market.

"While current forecasts for overseas visitor numbers suggest that overall car rental demands can be met, the factors outlined above are likely to result in some shortage of rental cars in peak demand periods. It will take time for car rental companies to build car stocks back up to pre-pandemic levels.

"In the meantime, tourists should book cars early to secure the best rates. I understand similar problems exist in other European tourism destinations."