Halappanavar died on October 28, 2012, at Galway University Hospital after suffering a septic miscarriage for which she was denied an abortion. 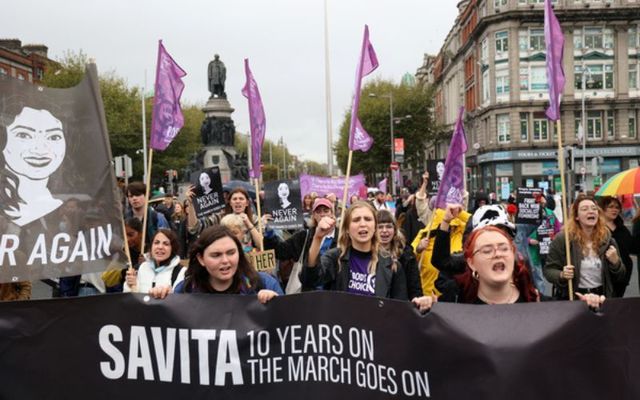 People demonstrate to mark the 10th anniversary of the death of Savita Halappanavar and to campaign for more Abortion Rights. Rolling News

Hundreds of people marched through Dublin City Centre on Saturday afternoon to mark the tenth anniversary of Savita Halappanavar's death, with activists pledging to launch a campaign for a permanent memorial.

Halappanavar died on October 28, 2012, at Galway University Hospital after suffering a septic miscarriage for which she was denied an abortion.

Halappanavar, a dentist, and her husband Praveen, an engineer, both natives of India, were living in Galway at the time of her tragic death.

Saturday's march began at the Garden of Remembrance on the north side of Dublin at 1 p.m. before proceeding to City Hall on Dame Street, where a number of speakers addressed the crowd.

The marchers stopped for a minute's silence at the Repeal mural in Temple Bar en route to City Hall, while they also passed a small group of protesters campaigning for women's rights in Iran as they marched down O'Connell Street. Both groups applauded each other.

Tarini Beeruka, a 21-year-old Indian student who came to Ireland a year ago, told the Irish Times that it meant a lot to him to be able to march in memory of Halappanavar.

"When Savita died, I was very young," Beeruke told the Irish Times during the march. "I saw the news in India that somebody from India had died in another country because she was not able to get an abortion."

"I was there in India, seeing her die, and now to be here to support and remember her really means a lot to me. I came to Ireland just this year, so when the news came out that there was going to be a march for Savita, I had to come."

Abortion activist Ailbhe Smyth was among those to speak at Saturday's march and called for reform to Ireland's current abortion laws.

"I am marching today to honor the memory of Savita Halappanavar whose needless, deeply sad death was the spark that ignited a massive movement for change leading to a momentous leap forward for reproductive rights and for equality in Ireland," Smyth said.

"We are proud of what we achieved, but there is a great deal more work to be done to ensure that everyone who needs abortion can do so."

Smyth also called for the provision of comprehensive primary care and hospital services to help women who need an abortion.

"Without the provision of widely accessible services, an abortion law is not worth the paper it’s drafted on."

Speaking at the Garden of Remembrance before the march began, Orla O'Connor of the National Women's Movement called for an end to the three-day waiting period before a woman can get an abortion and the abolition of the 12-week limit, which allows women to get an abortion during the first 84 days of their pregnancy.

There were also calls during Saturday's march to create a permanent memorial to Halappanavar.

Halappanavar, 31, was 17 weeks pregnant at the time of her death. She was told she was miscarrying after being admitted to hospital with back pain on October 21 and asked doctors to terminate her pregnancy on several occasions over the next two days.

She delivered a female fetus on October 24 and was transferred to intensive care after developing sepsis. She died four days later on October 28 from septic shock.

Her death is seen as one of the key factors in reviving the Repeal the 8th movement, which advocated for the repeal of Ireland's 8th Amendment, which gave an unborn child equal rights to those of the mother.

The amendment was repealed in 2018 following a landslide referendum victory.

Eilís Mulroy, a spokesperson for Pro Life Campaign, said in a statement that it was "unfair and disingenuous" to use the Halappanavar's anniversary to push for an expansion of Ireland's abortion law. Mulroy said Halappanavar's death was "not caused by the Eighth Amendment as campaigners for abortion have incessantly claimed".

"Mismanaged sepsis was the cause of Savita's death, as backed up by several independent reports, and not the denial of an abortion.

"Ten years on from her death, it is highly inappropriate for campaigners and pro-abortion politicians to continue leaning on myths and mistruths to push for a radical expansion of Ireland's already extreme abortion law."