Dublin City Council has said they do not know where the antique 1916 paving is or whether it was re-used elsewhere in the city. 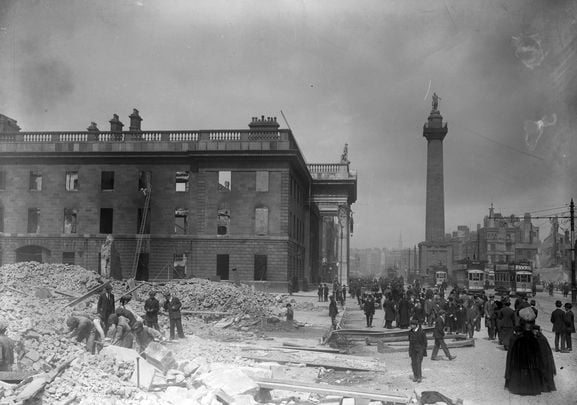 The shell of the General Post Office after the Easter Rising 1916. Keogh Brothers / National Library of Ireand

A bitter attack has been launched on Dublin City Council for losing the historic flagstones upon which Easter Rising leader Padraig Pearse read the 1916 Proclamation outside Dublin’s GPO.

In correspondence seen by the Irish Sun, a council official confirmed the stones were removed during the refurbishment of Dublin’s main thoroughfare, O’Connell Street, between 2004 and 2007.

Emails from December last year and February 2020 confirmed the stones were taken to the road maintenance services storage depot for re-use by paving crews in city center locations where antique paving is required.

But when asked where the “antique paving” was reused, a council official told the Irish Sun, “Unfortunately, the records in road maintenance services do not show where exactly this antique paving was re-used.”

On Easter Monday in 1916, Irish rebels led by Pearse occupied the GPO, and it became the headquarters for the Rising.

The same day, the Proclamation of the Irish Republic was read by Pearse outside the GPO.

One of the men beside him that day was James Connolly.  Both men were later executed by the British for their part in the Rising.

Connolly’s grandson, Jim Connolly, last week expressed his annoyance at the loss of the historic stones on which Pearse stood.  He told the Sun, “It’s just another example of links to the Rising being lost.

“If there was ever sacred ground, it surely is the ground upon which Pearse read the proclamation of the Republic.”

He added, “There are 32 locations that are directly associated with the Rising. Nineteen have been demolished or have been altered and are unrecognizable.”

Patrick Cooney, who works with the 1916 Relative Alliance and is the founder of the Save Moore Street Campaign, branded the council oversight an “insult”.

He said, “It’s such a historic site. It’s mentioned in nearly every book on the subject about Pearse walking out to read our Proclamation of Independence.

In a separate development, the work of an earlier patriot, Wolfe Tone, a founder of the United Irishmen, is to be honored at an auction later this week.

A previously unknown handwritten copy of Wolfe Tone’s speech from the dock before his 1798 death sentence is among a treasure trove of manuscripts to be auctioned at the weekend.

The Sunday Independent reported that the speech in Tone's handwriting and other historical documents had remained in the possession of the descendants of General Sir George Hewett, who was adjutant general of the British Army in Ireland in 1798.

Among papers quietly snapped up at auction in London last year, they will now be auctioned separately in Dublin.